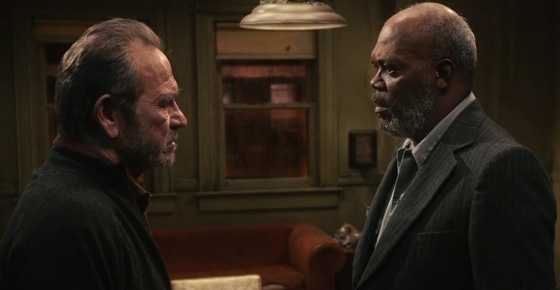 The Sunset Limited is a television film based on the play written by Cormac McCarthy (The Road, No Country For Old Men), starring Samuel L. Jackson and Tommy Lee Jones, who also serves as the film’s director.

Produced by HBO Films, The Sunset Limited takes place in New York City at Black’s (Jackson) apartment. Shortly after Black prevented White (Jones) from committing suicide by throwing himself in front of a train, they engage in a lengthy conversation, debating topics related to life and death, such as the existence of God, human suffering and White’s suicide attempt. Black is a born-again ex-convict who found salvation in God. White is a suicidal atheist professor. Points of view and beliefs clash.

There is hardly any physical action in The Sunset Limited. Black preventing White’s suicide attempt actually takes place off-screen. Only one place where everything happens and it takes two to tango. The idea of watching a religious believer debate against a suicidal atheist may not sound like something  to be excited about and could be hard to watch. However, the well-written dialogue featured in this film makes the back-and-forth debate between Black and White look engaging, interesting and it is like watching a great tennis match develop. Tommy Lee Jones does a very good job in his dual role as an actor and a director, but it’s Samuel L. Jackson’s character who stands out the most thanks to a great performance and delivery of his lines.

For the most part, I enjoyed watching The Sunset Limited thanks to its dialogue and it felt refreshing to see Jackson portray a different type of character. Give it a watch if you like both actors and don’t mind the topics that this film touches.