The Cadaver Has Come Back to Life: Interview with Jonah D. Ansell 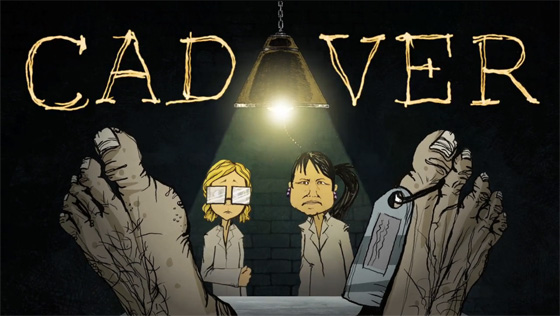 What better way to celebrate Día de los Muertos [1] than by watching this animated short about a corpse (or cadaver, if you may — voiced by Christopher Lloyd) that suddenly becomes animated, fueled by his desire to say goodbye to his wife. Of course, inconspicuous — and rather nerdy-looking — forensic or med student (?) Lynn (Tavi Gevinson) is in for a surprise when this macabre love story turns into a macabre road movie of heartbreaks and new found loves.

How about an interview with its creator, then? Well, I had a small chat with writer and director Jonah D. Ansell over the start of the weekend after I had checked out his 7-minute, 2D animated short — a darkly enchanting love story wrapped in a Dr. Seuss meets a hint of Tim Burton.

How was the pre-production stage of Cadaver? I noticed that you guys even had an original score. How did you guys manage the time and the resources?

Cadaver began as a poem I wrote to my kid sister (a medical student) on the day before she cut open her first anatomy lab cadaver. I guess you could say that was the moment we began pre-production. In truth, the poem was a quick email, it took ten minutes to write, I didn’t think twice about it and moved onto other projects, and didn’t return to it until at least a year later.

There was something in the poem that kept drawing me back to it. The most important part of pre-production was finding the right partners to help tell the story. My friend Amanda Dunham Ely (whom I met in the MFA program at the USC School of Cinematic Arts) came on as producer of the film. Together, she and I reviewed the works of over 400 artists until we found the exact visual style we wanted to tell the story with.

We asked Chris Thomas to create a live score because he communicated the power and impact of creating a score live versus using a bunch of pre-existing sounds available on a computer.

How did you end up with Christopher Lloyd and Kathy Bates as voice actors?

Amanda and I made a list of who our ideal actors would be. On a whim, we wrote to them. We were quite shocked when they said yes. They were so wonderful to work with and elevated the material to a new level.