Many Adventures of Winnie the Pooh, The 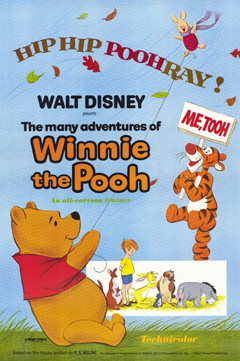 There’s something very warm and cozy about this 1977 version of Winnie the Pooh, that hasn’t really been captured in the subsequent series of The New Adventures of Winnie the Pooh, the straight to home releases, or the other movies. Maybe it’s because it’s the most based on the A.A. Milne stories, but it just makes me feel good when I watch this.

The animation on the film is dusty and scratchy, but quite smooth, it gives it a much more personal connection than the clean illustrations, the 3D version or the puppets. The voice acting is wonderful, specially Pooh’s innocent voice, Tigger’s warm chuckle and Piglet’s st-t-tutering — the three of them are staple Pooh elements that they have tried keeping in the future releases.

But what truly makes The Many Adventures of Winnie the Pooh memorable, and even better than the books… at least for me, is how they managed to keep a narrator and the book setting, letting the characters interact with the book layout. Sometimes Pooh flies across the pages, or he bounces on top of some of the letters in the text… sometimes the letters fly away as the wind blows, or they slide when the rain starts to flood the Hundred Acre Wood.

But when we talk about Winnie the Pooh, the best thing when you’re already a grown up is when Christopher Robin gets together with Pooh to tell him that he can’t visit the Hundred Acre Wood because he’s going to school. When we’re kids, this goodbye only means that — a goodbye. Once we’re really old enough… and as we get even older, this goodbye becomes even a heavier burden, a goodbye to a time to which we cannot go back.

It’s similar to that ending to Toy Story 3, which we all praised so much for making us all cry — though some said it was because of the dirty 3D glasses. In the case of all our friends in the Hundred Acre Wood is even more sad… they all live in Christopher Robin’s imagination, these are not toys that become alive when Christopher Robin is not around, these are characters that spring to live because of him… so when he leaves them, that’s it. Maybe one day, he’ll remember them but they will never truly meet again. Christopher Robin kind of knows this, which makes his request to Pooh even more heartbreaking~