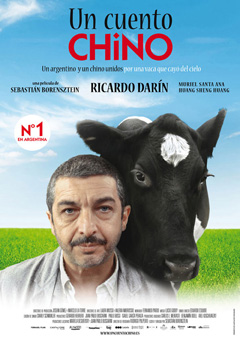 It all starts out with a cow that falls from the sky — which brought immediate memories of that playful movie known as Luna Papa — while a young Chinese man is about to propose to his girlfriend, who then dies from the freak accident.

Not knowing anything about the movie, I wondered what I was about to watch — seriously, what type of movie could possibly begin like that? But I stuck around for the ride long enough to be introduced to Roberto (Darin), a methodical, grumpy old man that owns a hardware store where he spends his days complaining about the “pelotudos” that stop by his store asking whether or not the store is really giving him 200g. of nails when he is charging him for 200g.

When Roberto is not dealing with the hardware store, he is busy being oblivious about Mari (Santa Ana), a woman he used to know back then and is in Buenos Aires visiting. She is madly in love with him and trying to get his attention. At night, every night always at the exact time, he scans several worldwide papers for freak accident stories to collect… then, he heads off to bed.

One afternoon, when Roberto is having his customary lunch while watching the planes depart near the airport, he runs into a Chinese man who gets mugged and beaten out of his taxi. The Chinese man, whom we later know as Jun (Huang), doesn’t speak any Spanish and Roberto has a hard time communicating with him to find out what his problem is and how he can help.

However, don’t be mistaken. Un Cuento Chino isn’t really a comedy, though I did laugh quite a bit in the first half of the film. It later takes a dramatic turn that might be a welcome change in pace for some or a turn-off to others. In my case, I thought it added aneeded layer to the story, but it does feel like a whole different movie.

Darin excels as the comically bitter Roberto, and Huang only highlights the comedic parts while being capable of handling the more dramatic aspect of the story. My problem with Un Cuento Chino, however, comes from the language duality. It’s a necessary aspect of the story to later include someone that can translate what Jun was saying because learning to magically speak Spanish in a week was not going to be possible, but including his Mandarin dialogue and the translated Spanish dialogue dragged scenes longer than they needed to be.

Overall, Un Cuento Chino was a nice surprise to catch, but a pretty inconsequential one.