Cold Water of the Sea 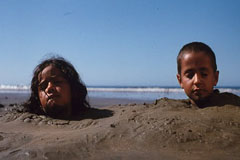 Cold Water of the Sea tells the story of a young couple about to get married that go on a holiday trip to a tropical “paradise,” when they run into a girl who seems to be lost in the middle of the night. When they try to find her parents, the girl has long gone, which creates a bizarre connection between the girl and the woman.

Perhaps Cold Water of the Sea’s best feature is its locations on the “exotic” beaches of Costa Rica, because neither characters nor situations live up to anything. It’s not as if we wanted high tension drama in this, but we at least expected to sympathize with the characters. However, we end up knowing little about them, having spent a bit less than an hour and a half wtih these people.

A lot of the time is spent on the little girl, who tells the couple that her whole family has died in a transit accident, when in fact they were alive. Why is that? “Kids are like that,” stated the mother. But why did she come up with something like that? She is certainly more than a spoiled brat, treated differently from her three older brothers by her dad. There are certainly hints of Electra Complex in the girl, but nothing is explored. Instead, director Fabrega decides to make some sort of distinction between social classes? Just because one side of the story is set with a poor family at the beach and the other with a well-off young couple at a fancy resort?