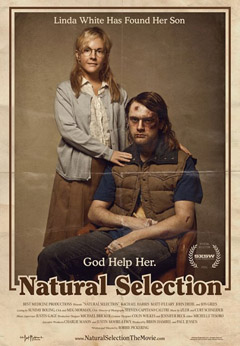 I’ve watched a lot of weird stuff in my movie-life, which includes the epic panties-photo-snapper Love Exposure and 3D Zen & Sex: Extreme Ecstasy. So it’s a feature to get me to turn off my player at the ten-minute mark because a man coming out of a lawnmower followed by a man waking up with a woody was too much for an 8pm watch for me.

Natural Selection gets off to a shaky start, literally, when Linda White (Harris) wakes up to her husband of 25 years, Abe (Diehl), in a state of a morning wood. Completely taken by it, or rather in need of it, she launches over him trying to get some.

May God help her as Abe stops her from doing anything that might be considered a sin. After all, sex without procreation is a big no-no.

Linda goes on about her day, maybe slightly frustrated, but still content with living a life of spiritual fulfillment alongside her husband. All of a sudden Abe suffers a stroke at the sperm donor clinic he’s been donating his sperm to for the last 25 years of his life.

As Linda reexamines the repercussions of this according to her existence, she sets out to find Abe’s biological son before it’s too late.

Natural Selection is a bizarre dramedy — aren’t all dramedies a little bit weird on their own way? — about a passive-hysteric woman who’s been living a lie almost all her life and goes “on the road” in search of someone that might turn out to be a criminal for all she knows. Rachael Harris (the pushover wife in The Hangover) plays Linda to a tee, quite relatable in her very own way with an air of naivety that might be a result of being surrounded by a closed religious community.

Enter Raymond (O’Leary), the mother of all bastard sons, who swipes twenty bucks from Linda and threatens to smash her face if she ever brings up God in whatever story she’s trying to tell him. More than destiny puts Raymond on the run alongside the naive Linda, where obvious funny things happen as they bond with one another. However, all these situations are all a light screen to what actually makes Natural Selection much more enduring than a mere comedy.

I guess I have seen too many Hollywood films in which our female lead finds her current mate is good for nothing while replacing him with a better suited partner, making the ending in Natural Selection a lot more surprising and slightly more refreshing than your run-of-the-mill female-centric film.