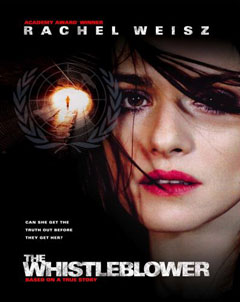 The Whistleblower is an intense drama based on Kathryn Bolkovac’s — in the film played by Weisz — experience as a peacekeeper in post-war Bosnia, exposing the U.N. for covering up a sex traffic scandal.

Bolkovac, in the film, is a cop in Nebraska struggling with her crumbling marriage. She is also trying to get her transfer in order to be closer to her daughter, who is living with her father due to custody. Unable to get the new job, she takes the opportunity to go to Bosnia to help with its rebuilding and get a nice amount of money for just six months worth of work.

Little did she know her job would be this demanding.

The Whistleblower deals with a horribly disgusting subject — human trafficking and (sex) slavery, of course, is a very hot topic this year (CNN even has a campaign to end it). What makes matters even worse, the film is actually based on the true accounts of Bolkovac, even though the company’s name has been changed in the film (why even bother?), meaning all the horrendous stuff on screen did actually happen and is still happening somewhere around the world. It all makes for a hard movie experience that’s maybe worth just one sit through.

The film is dark and shaky, as if you were really in there without being able to do anything. Weisz, of course, carries the whole film — she’s eager to begin her work and then is crushed by the whole system she’s supposed to be working for. It seems hopeless when Vanessa Redgrave shows up on screen as Madeleine Rees, Bolkovac’s boss once the current one gets promoted. Though wonderfully appalled at what’s happening in her organization, it seemed that’s pretty much what she’s used for — the same with Bellucci, though I smelled funny business in one scene when everything goes wrong. Whenever we feel like we’ve got no way out, our hearts are racing and hoping for Raya’s well-being (Condurache) — the young girl lured by a friend and a relative into this hell of a life.

However, the film suffers from an inconsistent script that starts out with a family that’s altogether forgotten, a casual encounter that does little to get the film going. They’re all attempts to make Bolkovac a more real character, but even with those scenes we never know what gets her going or we never really care about her. We want to know what’s going to happen to these girls and what the U.N. will be doing. What the writers didn’t seem to realize is that this isn’t really a character piece — at least not on Bolkovak… maybe on Raya and her mom Halyna (Hain).

The Whistleblower‘s main feature is that it’s a film depicting a real situation that would have benefited from a more broad perspective, other than Bolkovak as a script consultant.