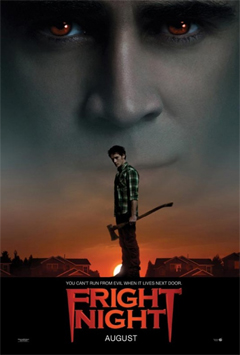 I begin this review with a simple disclaimer: if you are a hardcore fan of the original, please enter this film with an open mind. Either that, or you can stay at home with a stake in hand. Craig Gillespie’s Fright Night is definitely a refreshing update on the original film, and although nowhere near perfect, it reminds us that adapting something to modern times can sometimes be worthwhile.

Charley Brewster (Yelchin) is a teenager who has left his embarrassing past behind him for bigger and better things, especially Amy (Poots), the girl he’s interested in. It isn’t until an old friend Ed (Mintz-Plasse) confronts him about a string of recent disappearances in the town that he’s dragged back into it. After a bit of blackmail, Ed mentions his suspicions that Charley’s neighbor, Jerry Dandrige (Farrell), is a vampire. It isn’t until Ed goes missing as well that Charley begins to investigate and realizes just how much truth there was in his friend’s far-fetched story. With no one to turn to and his mother Jane (Collette) to protect, it’s up to Charley to find a way to fight against Jerry. In desperate need of help, Charley turns to the one person that might be able to help him, Peter Vincent (Tennant) — who just happens to be a Las Vegas illusionist and vampire hunter.

The most beneficial thing to this film has to be the casting choices and the acting. Anton Yelchin has always done well in his films, and he’s great at performing teen roles without falling into a repetition between his characters. This is no exception, and he holds up well against a more experienced actor like Colin Farrell — who was the perfect choice for Jerry Dandrige. Tall, handsome, and subtly sexual, he’s got the perfect looks for a vampire, but he also brings both the humor and aggression necessary for the role.

Imogen Poots delivers her first performance that has really stood out to me, and Toni Collette works well with director Gillespie — who has directed many episodes of United States of Tara. Playing a man who is nothing like his most known character from Doctor Who, Tennant delivers the most laughs with his outrageous performance as the rude, alcoholic illusionist Peter Vincent. Even his interactions with his showgirl Ginger — played by Sandra Vergara — are simple and hilarious. Unfortunately, when it comes to Christopher Mintz-Plasse, not much good can be said. His character was probably the least interesting and it seems as though he’s recycling performances from movie to movie.

Marti Noxon knows what she’s doing when it comes to writing. Yes, she does borrow from the original, but there are such few similarities that the existence of another film seems almost trivial. Thankfully Noxon’s background on Buffy the Vampire Slayer is felt throughout. She knows how to write about teens and the supernatural in just the right way to appeal to most people, and while some of the side characters feel unnecessary, she keeps the focus on the ones that matter.

Fright Night is nowhere near a masterpiece, but Craig Gillespie makes a good remake of an alright film. His work on Lars and the Real Girl may be more impressive, but he does a good job with this. The technical work from everyone in this film is something to look forward to, most notably the stunning prosthetic makeup work on the vampires, as well as some great art direction and cinematography that provides some very pleasing shots.

The collaboration between Gillespie, Noxon, and the cast works out for the best, presenting audiences with a movie that’s as funny as it is gory. Fright Night may not be the first choice for fans of the original, but it proves itself as a good horror film that has quite a biting sense of humor.