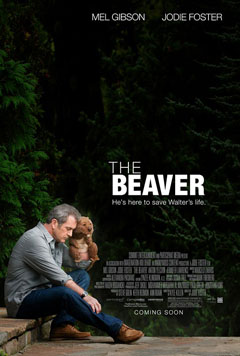 The Beaver is a movie about depression, but unlike melodrama, this film’s got plenty of laughs and sorrow masquerading as awkward laughs until the resolution, which turns pretty disturbing.

Here comes Mel Gibson, asking a lot from his viewers because if you had a television or a connection to the internet (which you do if you’re reading this post), then you’d be aware of the situation Gibson was in when Summit decided to shelf this film.

Gibson is Walter, a man who was appointed CEO of his family’s toy company, not because he was qualified, but because he was next in line. Unable to cope with the pressure, he spirals into a deep depression and struggles with it for two years. He is at the mercy of his wife, Meredith (Foster), and their two kids Porter (Yelchin) and Henry (Stewart) — one of them desperate to get away from the image of his depressed father and the other desperate to disappear instead of being ignored.

One day, at the tipping point of his depression, Walter decides to kill himself — this brought memories of What Women Want. Instead he ends up with the TV smashing his head and a beaver puppet on his left hand, simply called The Beaver.

And that’s exactly where it all begins.

The closest comparison I could draw with any film is Lars and the Real Girl, in which a character with deep emotional issues establishes a relationship with a lifelike inanimate object. From the get go, The Beaver looks and feels like it’s actually a real character and it works surprisingly well to have Gibson against it. It is often awkward to see him do stuff with The Beaver on (this keeps on sounding wrong), even though we do accept him as does his family.

However, we never really feel truly comfortable with it. Maybe because it doesn’t look human like with Bianca, which causes us to laugh when Gibson and Foster are making out in bed. Or maybe it’s a deliberate attempt at making us laugh, considering Gibson was doing The Beaver’s breaths with his hand.

The best aspect of the film was the family drama of the son who hates his father. Yelchin did a pretty good job at it, but his storyline with Jennifer Lawrence’s character seemed a little disconnected from the whole film. That final speech lacked a little bit of a punch. It just wasn’t all that emotional. Though, considering what happened to Walter in the resolution, it’s a hard act to follow with emotion, and a change that doesn’t really feel right.

Foster’s job as a director promoting the film was the toughest one. It’s hard to promote a film in which the main character carries the whole film, and your main actor causes a stir that might put your film in danger. Whatever our thoughts are on the Gibson situation, Foster’s sticking by him tells more about who she is than anything else.

In the end, Mel Gibson does carry the film and his scenes with The Beaver are some of the best. I, for one, can vouch for a Mel Gibson vs. The Beaver Best Fight nomination.