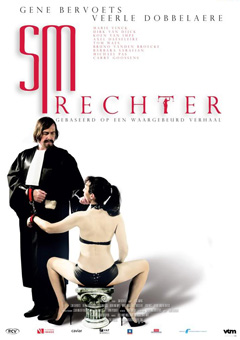 Based on the true story of a Belgian judge who was accused of assault and battery against his wife, after she confesses to him that she would like to be dominated and they begin their sado-masochistic relationship. How could I not just watch SM-rechter? It’s an irresistible story that combines a mutual love story, a privy view on an S&M relationship, and the frustration of the justice system!

And you can watch it on MUBI!

Judge Koen Allegaerdts (Bervoets) is a magnificent judge; he is efficient as most judges don’t seem to be, and he saves people’s resources by dismissing ridiculous cases before they reach a court house, which means that he’s gained a whole bunch of enemies. At home, things aren’t much better; his wife Magda (Dobbelaere) has sunk into a deep depression that keeps her in bed all day, unable to even prepare breakfast for her young daughter.

Judge Koen tries hard, so while celebrating his 15th year of marriage, Magda breaks down unable to hold it in any longer, and agrees to get some help while considering divorce. Therapy seems to help when Magda sits Koen down, showing him her sketches, she tells him that she’d like him to dominate her in bed. It’s been her wish for the past 30 years of her life and that it’s the main reason she’s been so miserable all her life. Koen is like all of us, fearing of this unknown that his wife has thrown at him, wondering if he would be able to hurt her. However, after a curious visit to the SM local club, Magda gets Koen to participate a little.

The rest is an exploration of that relationship as Magda and Koen spend years doing this. Their daughter grows up and goes to college, and the now happily married couple are having the best time of their lives, until they get found out. Though Lamens’ film is technically conventional, it doesn’t deter on how unique the story is, and it captures how infuriating the justice system really is to a tee. Of course, the selling point of SM Judge has got to be the S&M exploration of the story. For most people, I think, their only exposure to S&M and bondage is through the lens of a random episode of NatGeo’s Taboo series… or Steven Shainberg’s Secretary. However, in none of them do we ever explore the mutual connection and respect a couple has for each other when they decide to get into a sado-masochistic relationship.

Bervoets does a great job portraying the unjustly accused judge, but it’s Dobbelaere that gets a big chunk of the credit here. Her physical endurance is… quite outstanding, though it’s her final monologue that got to me. It voiced everything in a way that made me fist-pump and cheer for her. Despite its subject matter, SM Judge is quite the crowd-pleasing film and should probably have been enjoyed by a whole lot more people than it was.