Story of the Last Chrysanthemums, The 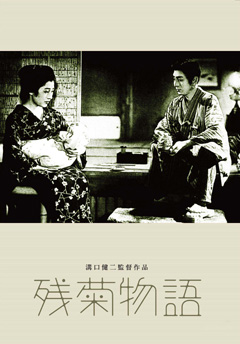 I barely made it to this blogathon.

There is no worldwide 1939 Film Blogathon, if we don’t include something from Asia, so we’re going to be talking about this Japanese classic.

The Story of the Last Chrysanthemums, or simply Zangiku Monogatari (because “chrysanthemums” is such a difficult word to spell), tells the story of Kikunosuke (Hanayagi), the son and only successor of a great Kabuki performer. His only problem? While everyone praises his acting to his face, everyone talks behinds his back about how much he sucks.

Everyone except his baby brother’s wet-nurse, Otoku (Mori). She tells his like it is, and makes him want to improve. However, the relationship forging between the two isn’t accepted by Kikunosuke’s renown family, casting them aside until the day Otoku gives it all up for Kikunosuke.

The story in Zangiku Monogatari is simple, lovers who can’t be together, but one of the elements that elevates the quality of this film are some of the sweeping shots, letting the camera work and its acting flow. There’s very little use of medium shots or close-ups, and most of the story is told through general views and striking framing.

Though Hanayagi’s Kikunosuke’s portrayal seems a bit… distant, and makes it  difficult to spot how he really feels for Otoku — sometimes we’re not sure if he’d be willing to give it all up for her, just like Otoku seems to do for him at a drop of a dime.

Hmm, maybe not recommended for those trying to get into classic or foreign films, but totally worth it once you just can’t get enough of them.