Pirates! In an Adventure with Scientists, The 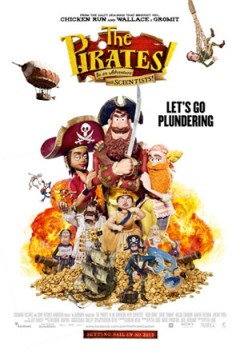 Following Arthur Christmas, Aardman and Sony team up once again to bring you The Pirates! In an Adventure with Scientists, the film adaptation of the first two books from The Pirates! series by Gideon Defoe, who also serves as the film’s screenwriter.

Pirates! follows the Pirate Captain (Grant) and his diverse crew of amateur pirates in their overseas adventures. In order to prove himself to his crew, the Pirate Captain enters the Pirate of the Year competition — which consists of winning by obtaining the most amount of gold — despite being nothing short of a joke when compared to fellow pirates Cutlass Liz (Hayek), Peg-Leg Hastings (Henry), and the usual winner Black Bellamy (Piven).

As the Captain tries to win the contest, one of his ship attacks leads him to meet Charles Darwin (Tennant), who sends them to London as he wants to use the crew’s “big boned parrot” — which turns out to be a surprisingly not-extinct dodo in 1837 — to win the Scientist of the Year award. However, things go wrong for everyone when pirate-hating Queen Victoria (Staunton) shows up.

The Pirates! leads the audience to wonder if recognition and success are more important than self-respect. This is answered through the Pirate Captain, especially when he meets Darwin and the Queen. Instead of sending Darwin down the plank, the Captain spares his life because he, tired of failing at being a pirate, wanted to taste victory in anything just to heal his bruised ego. But when the Captain meets the Queen, she strikes a deal with him that helps him acheive what he wanted the most. However, it backfires on him big time and he ends up in a bad position. Yet, he sets himself up to fix his mistakes before it’s too late.

I have to admit that Hugh Grant is almost unrecognizable as the Captain’s voice; if you go into this film without knowing who’s who, the shock value would be bigger. That said, Grant’s voice acting worked well. The supporting cast is great: Martin Freeman shows good comedic timing as the scarf-wearing pirate who serves as the Captain’s second hand, David Tennant comically plays Charles Darwin as a nervous geek, worried that he’ll never get a girlfriend instead of the revered scientist that he is today, and Imelda Staunton was fine as the main antagonist.

While the rest of the cast gets enough screentime to nail funny lines, it’s Darwin’s chimpanzee, non-verbal Mr. Bobo, who steals the show through his amusing methods of communication, which include note cards. By the way, it’s interesting to note that Darwin and Bobo’s relationship works like Wallace and Gromit’s, considering Aardman produced the Oscar-winning Wallace and Gromit feature film.

The film notably uses top-notch stop-motion animation, but visual effects and digital animination were also used to round out the overall product. The film looks visually great and you don’t need to watch this in 3D because a 2D viewing will suffice to appreciate the details behind the animation.

Let’s hope that when it comes to the awards season, The Pirates! In an Adventure with Scientists doesn’t get lost in the shuffle. It’s a fun film that boasts great animation, a talented voice cast, re-arranges historical characters for fun, faetures nutty British humor that works for both kids and adults, great music selection (with the exception of how they used The Clash’s London Calling) and good storytelling — tools that should be more than enough to make it a legitimate contender for Best Animated Feature Film.