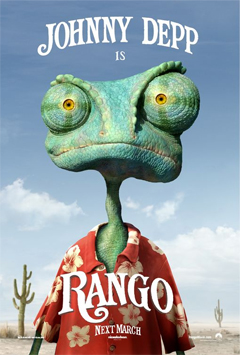 It shouldn’t take any time for mature audiences and lovers of animated films – and especially westerns – to fall in love with Rango. While some average moviegoers may complain about Gore Verbinski’s latest film not being enough of a traditional feature, this off-beat animation is one of the best in years.

The film begins quickly, flinging a theatrical and humorous pet chameleon (Depp) out from his humble abode into the vast Mojave Desert. He meets an armadillo named Roadkill (Molina), who is searching for the Spirit of the West and warns him to seek out water. After a close call with a hawk and a surreal nightmare, our chameleon stumbles into desert iguana Beans (Fisher) – who takes him to Dirt, an Old West town populated by desert animals. He quickly takes the name of Rango and takes the role of Sheriff in the small town. Once Rango discovers that the town’s water supply is running low, he brings it upon himself to be a hero to the overly tense townspeople by attempting to find a cause for the drought.

It takes no time at all to realize just how different Rango is from your average animated film. Between characters like the villanous Rattlesnake Jake (Nighy) and the greedy Mayor (Beatty), and an intense bat-riding scene that parodies Apocalypse Now, the film proves to be much darker than most animated films – especially within the second half of the picture. Although I’ve only mentioned a handful, the abundance of references to other films ranges from classic cinema to some more recent Johnny Depp films, including Fear and Loathing in Las Vegas and Pirates of the Caribbean – which Verbinski also directed.  One might even warn that to fully appreciate its potential, they should watch The Good, The Bad and the Ugly and Chinatown, both of which are heavily referenced in the film.

Depp’s voice-acting talents are definitely showcased here more than usual. His wild performance as Rango is nothing short of brilliant, bringing a lively and unique character to the screen. Nighy, Fisher, and Beatty also deserve special praise for their voice acting talents – helping to provide the perfect characters and setting an excellent tone for it. However, my personal favorite bit of voice acting was Timothy Olyphant’s sexy voice as The Spirit of the West – which will come as one of the biggest and best surprises and homage’s of the film.

Another extremely notable thing about the film happens to be the visuals. I could go on for decades about how gorgeous and realistic the animation was, especially when it comes to the texture and the lighting, but I’ll leave it to viewers to experience that for themselves. The CGI was actually done by Industrial Light & Magic, marking it as their first feature length animated film. Influenced by the great Ennio Morricone, Zimmer’s score is appropriate for the film – regardless of just how much it sounds like some of his own previous works.

Gore Verbinski’s first shot at animated filmmaking is unquestionably a success, appealing to both children and adults with its sublime storytelling and spontaneous characters. Rango is packed with plenty of big action sequences, hilariously witty dialogue, and tender and romantic moments – making it a film that leaves fans of almost any genre feeling satisfied.