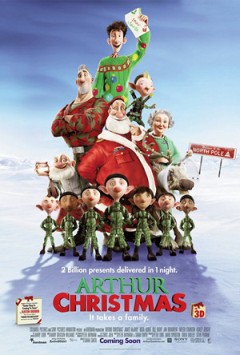 The Christmas season starts with the question that many nosy kids have asked in this “need for answers” day and age: if Santa is real, how does he manage with all those presents in one night?

A huge USS Enterprise/sleigh mash-up — full of a zillion black-ops elves and one jolly Santa Claus (Broadbent) — is carefully supervised via a North Pole base with Claus’ elder son, Steve (Laurie), in command.

What I found the coolest was how totally British it was. Santa Claus is a title, which passes from generation to generation as if they were monarchy. And Malcom, current Santa, is just a figurehead, who gives away the token last gift in each city, but the bulk of the job is done by the elves (and Steve).

But then, tragedy strikes and one little girl (Marquez) is forgotten. And that’s not acceptable according to Arthur (McAvoy), Santa’s clumsy youngest son. With the help of Grand-Santa (Nighy) — current Santa’s father and the last Santa to use a regular sledge — and a stowaway elf (Jensen), Arthur embarks on an adventure to deliver this last present before sunrise.

I found this movie very engaging and with no “bad guy” in sight, you could just immerse yourself in the action-packed yet Christmasy feel of it all. It didn’t hurt that Arthur Christmas had witty lines, poignant moments and it is quietly progressive. How come? Well, no one comments on elves with piercings or gay elves — they are just there and it is normal. Also, it’s funny that Mrs. Santa’s (Staunton) name is Margaret, because Jim Broadbent is going to be married to another Margaret in The Iron Lady.

The animation is up to the standard you would expect from big studios and the 3D is not needed, as usual. All in all, that Aardman/Sony union worked quite well above my expectations.