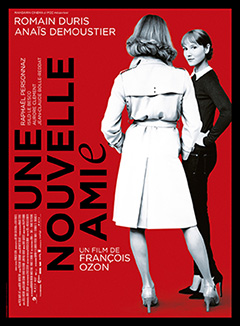 François Ozon’s style of filmmaking always tends to focus more on his set-ups; the art direction and wardrobes often as much characters (or more) as the people playing his characters on screen, with 8 Femmes and Potiche being the strongest examples of this. In The New Girlfriend, Ozon begins his story with the tale of two girls who were practically born to be best friends forever, until death did them apart.

Being prepped up as if it were her wedding day, Laura (Le Besco) is being prepared for her funeral to the heartbreaking disbelief of Claire (Demoustier), who -as shown in a stylish montage- had spent a big portion of her childhood and her entire teenage years with her, sharing the love and -possibly- seething each other’s newly found loves and significant others. Now, leaving a baby daughter and a husband, David (Duris), behind, Claire swears to be the leaning stone for both of them, but is unable while mourning the loss of her soulmate.

At the insistence of her husband, Gilles (Personnaz), Claire visits David only to find him nursing his daughter dressed up in Laura’s clothes.

Though Ozon never gets inside the character’s skins to study their pain and coping with their loss as in a straight drama, and perhaps Rendell’s short story doesn’t delve into it either; The New Girlfriend certainly presents an interesting dynamic with Claire much able to form a relationship with David, as Virginia, to substitute whatever she had- and maybe all that she couldn’t have with Laura. The most striking contrast is when she heads home for a passionate sex session with her husband after spending the day playing girlfriends with Virginia, something she obviously hadn’t been able to do since Laura got married. Her ecstasy reaches such level that even Gilles is as surprised as the audience, who had been seeing Laura’s hot and cold interactions with her new best friend, who throughout the film tries to make justifications as to why David likes to dress up as Virginia.

The film blurs the line of gender and sexual orientation, something not necessarily often talked about on LGBT films stateside (America as a continent too) or within the mainstream LGBT community, which surprisingly continues to discriminate against transgender people and those who identify as bisexual. The themes reach their climax – no pun intended – and come full circle in its third arc, which does feel rushed and leaves you with more questions about Laura’s psyche than anything. It ceases to be the journey of a transgender woman’s transition and becomes the odd story of a woman’s grief and pain soothed by her newly found friendship… or more.

The New Girlfriend is held together by strong performances, but it’s greatest hook is the inner-workings of these people’s minds, which sadly are never truly explored. However, the premise is still extremely interesting.