Team Gaji – What Does the Fox Say 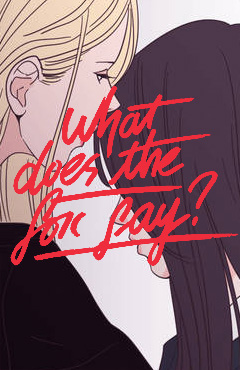 So I’ve fallen into that side of fandom that ends up watching fan-made videos on YouTube, after catching up on +80 chapters in a matter of days. For those who know me, the reason of my finding What Does the Fox Say may seem obvious; I ‘found’ this and made it my first ever manhwa, which has swiftly opened the gates of fandom shipping like I haven’t experienced in a decade since The L Word (but feel free to prove me wrong).

What Does the Fox Say (often shortened to WDTFS) follows the lives of three women— we’re introduced to blond 24-year-old Ju Sungji (also spelled “Seongji”), a new assistant at a mobile game developer studio called Hello Studio; her team managed by team manager Sung Sumin [coincidentally, also spelled “Seong”], a black-haired short 34-year-old with a ‘cute’ complex; and the 34-year-old pink-haired CEO Baek Seju, who used to be classmates with Sumin, as well as her first love.

Just looking at their names and early interactions, it seems as if Sungji and ‘Sung’ Sumin are already meant to be together; while also establishing the fact that Sumin can’t hold her alcohol, which would point at her not being able to hold her “Seju,” [1] down. And while I agree that Sungji seems to be a good match for Sumin, especially considering the developments during the chapters between 80-to the last one published [until post time], I cannot resist Baek Seju and her tragedy because I’m a sucker for that.

The manhwa is neatly illustrated, the three main characters are literally out-of-this-world attractive, and they know it because they sparkle in vignettes. The mature content, though at times fan-servicy smut, is well-handled to push the story forward or reveal a characteristic of their past. I did get confused about what timeline I was on, and whether this was happening in the present or when they were younger, but a second sweep (yes) cleared that up. I had a harder time figuring out secondary characters, except a few key ones such as Sungji’s oppa, and two of her co-workers; Sumin’s blue-haired model friend and infatuated-with-Seju Nami, and Seju’s father— I can’t tell her brothers apart because they’re simply a blob of nasty.

Strangely enough, reading this gets addictive to the point that you keep wanting to read one more chapter. Among all the drama, there’s light (often dry) comedic moments that highlight the butterflies of Sumin’s love story with Sungji, and the heartbreak that her relationship with Seju is causing the both of them. It’s not normally the type of ‘manga’ I would read or watch in anime form, but I’ve been really enjoying it.

Oh, yeah. Just like in The L Word, almost every female character is a lesbian.

Note: Made up cover coz I needed a cover.

You can read all the published and future chapters of What Does the Fox Say over at Lezhin. They’re all published in Korean and officially translated into English.