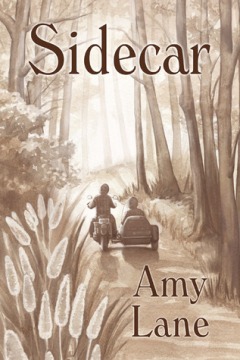 How does one begin to describe the seeming effortlessness with which Amy Lane writes? It’s a combination of the natural way in which her characters move around each other, the quiet moments expanding far beyond the words on the page, and the loud moments that filled me with such emotion I was afraid I’d combust.

I finally sat down and realized a story like Sidecar doesn’t need verbose overstatements of appreciation, exaggerated appeals of its brilliance. The work stands alone and shines on its own merits. The story is as simple as love itself, yet the richness of each character gives the story a depth I haven’t seen in many novels that purport to illustrate the intricacies of love.

We’re first introduced to a young man, walking alone in the dark and slush-dampened snow. He’s as thin as the air that leaves his lungs. Suddenly, a man and what seems to be a giant ride up on a motorbike. The smaller of the two, Casey, calls to the young man, imploring him to allow him and his partner Joe to take him home to feed him, clean him, and get some of the cold out of his skin. Something in this lost child speaks to Casey and Joe, something so familiar it sparks a memory of another chance encounter between a lonely man and drifting soul.

Casey and Joe’s relationship is as twisted as the road Casey almost succumbed to at the age of 17. He’s a kid excommunicated from his home, used as a ragdoll, and finally driven to escape the torment that seems to constantly eat at him. Though he contemplates, only for a moment, actually leaping over a bridge, something forces him to push on just a bit further. And that’s when he meets him, the man who would become his savior and the love of his life in a matter of moments.

Joe, on the other hand, is a man who’s always been more comfortable in the quiet, an aftereffect of the incredible loudness he attempted to fill in his life after his beloved older sister committed suicide. He moves to the mountains, keeping to himself and living in relative silence. When he meets Casey all the noise he was trying to keep out comes blowing into his life, giving him something more substantial to live for — the love of someone who steals inside him and repairs some of the kinks in his heart.

Casey’s life as a hustler forces him to see things very black and white — either you want me or you don’t; but I want you and I know this can work. Joe, however, has always erred on the side of caution — you’re just a boy; I’d only be taking advantage of your youth. In this fashion the two dance around each other until the thickening tension threatens to crumble the growing domesticity of their living situation.

Through loss, lots of cats, and a glut of music, Casey and Joe live their lives simply and without exquisite bouts of cloying sentimentality. And that’s what’s glorious about Sidecar. It’s so… simple, so pure. Words can muddle what’s already beautiful about the story. It’s easily one of my favorite reads of 2012, not because it shows the glamour and ostentation of love. But because it shows that love is as simple as running into somebody on the sidewalk and knowing he’ll always keep you warm on dark, slush-dampened nights.

You can purchase Sidecar at Dreamspinner Press or Amazon.

To learn more about Amy Lane, visit her website.