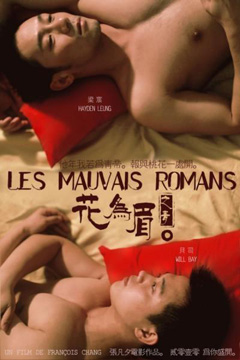 If you didn’t think Lady Gaga’s Bad Romance [MV] was annoying, François Chang’s usage of the song might make you think again. But it does seem to exemplify the times we live in, as a group of young adults in bustling Beijing explore their sex/love lives.

First, we have Bei Si (Bay), Xiao Ya (Chen) and Yasmine (Chan) who are getting ready to a bizarre montage of Lady Gaga and Edith Piaf. While Yasmine arrives late to her first French lesson, where she meets LouLou (Hsiao) and François (Chang, a la Woody Allen but slightly less annoying) with whom she’ll develop a bizarre relation of bisexual nature, Xiao Ya gets introduced to Liu’s cousin, Cong (Lau), and Bei Si meets the mysteriously handsome Liang Qing (Leung).

Though the structure of Les Mauvais Romans gives the relationship between Bei Si and Liang Qing more importance than the others, accentuating the LGBT content of the film, it doesn’t really explore any particular LGBT issue — maybe until the very end when Liang Qing tells Bei Si that people are suspecting him of being gay. All throughout the film, we are left with the love misadventures of Bei Si, who at first was weary of Liang Qing (and rightly so), who pines over his presence within a bizarrely surreal ambiance between reality and dreams. At moments, especially during the sequences featuring Xiao Ya, the film reminded me of a slightly less technical In the Mood for Love.

The rest of the stories, however, especially the one featuring the bisexual storyline, are less explored and quite strange by the end of the film. It involves friends who conspire against each other — Xiao Ya’s friend bluntly lies to her in a weird sequence that could border on an “everything was a dream” scenario, while LouLou turns evil against Yasmine. Not like most films get bisexuality right, but come on!

Les Mauvais Romans has its good qualities — visually, it’s got something. Then again, the flower patterns (that might be giving the film its “Hua” in the title) look stunning against the deep reds. Its only major technical fault would be the sound design, which was overbearing most of the times. Not only with its use of Gaga’s song, but the foley was a little bit crude and distracting.

One of the most surprising bits in the film, however, has to be the sex scene between Bei Si and Liang Qing, which happens to be included within Xiao Ya’s storyline with Cong. It isn’t anything explicit, but it’s usually more in your face than anything non-CatIII I’ve been able to see, which is not entirely surprising after you search for information on Hayden Leung. The scene drops all the mood, some of the careful framing and gives us low-lit, close camera angles with heaves and grunts.

Not awful, but not exactly excellent either — yet the gay storyline salvages it.