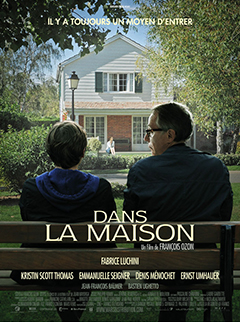 As Germain (Luchini) reads from the first paper that student Claude Garcia (Umhauer) hands in, François Ozon wisely hooks the audience in  with Dans la Maison. It is a strange story of how the young man works his way into the house of a fellow student, whose life and family seem absolutely perfect from the outside in. Claude closes the first paper with ‘to be continued’ with the upcoming papers all following suit, only to pique the interest of any reader.

There’s an air of the same middle class commentary something like American Beauty provides, but that scent is quickly blown away as Ozon has other plans for his characters. Instead he presents both Claude and Germain through a different scope of how voyeurism serves as a stimulant for life.

Germain and his wife Jeanne (Scott Thomas) are fascinated by the writing to the point of near obsession. Germaine uses Claude and his writing as a jump off point to rekindle a fire in his teaching career that has not existed for a long time. There’s a zest in his every word as he speaks of Homer’s Odyssey and Dostoevsky to the boy and tries to convince him to go on writing. Claude, however, solely desires to learn more about his characters, to create a world of fiction out of these strangers he meets. Embedding himself in their homes is only part of the storytelling game, and Ernst Umhauer’s performance only serves to make his character all the more unsettling.

The audience is pulled along by this same obsessive string that Germain and his wife are. There’s the innate sense of understanding how this voyeuristic lens, but the desire to learn more about these people overwhelms that. “Some people love that. Peeping through the keyhole,” Jeanne says, and it’s an apt description of how humanity finds interest in people they’ve never met. Often enough, teachers recommend people watching for inspiration, and that’s exactly what Germain does here, only ten steps further.

The film’s narrative breaks the wall between reader and writer, and even viewer and director to a certain extent, by analyzing itself at every turn. It’s a sharp blend of fiction and reality that pushes one to maintain interest and yet its self-criticism is just as fascinating only because it adds an extra layer to the light predictability of it all. Ozon understands how an audience reacts to a film, and even more of how a person finds interest in the lives of strangers.

Ozon has a dark sense of humor that he injects into this tight little drama more often than expected, even when it’s not entirely necessary. The tone is a little sporadic and certain scenes fall out of place in the big midst of the story one wants to hear: the one of Claude in the house. Even amusing segments with Jeanne hoping to find a new art exhibit that doesn’t involve Hitler sex dolls falls a little flat in comparison to the main narrative, already drowning in almost repressed sensuality.

For all its flaws, Dans la Maison is still an engaging narrative throughout. It almost makes one wonder though – without the same flaws, would the story be as interesting as the tale one makes up about the couple they see fighting on the train? François Ozon is simply reminding the world that maybe voyeurism into the lives of others is exactly what gives birth to the most fascinating of stories.