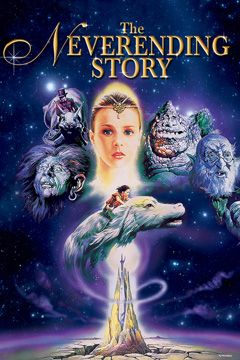 For all the drama and complaints Michael Ende had on the making of Petersen’s The NeverEnding Story, to the point of not wanting his name to be remotely linked to this piece of “junk,” the film adaptation of his epic novel (that you should all read, by the way) remains a rather “cult-ish” classic of 80’s children films that has just turned 30-freaking-years-old.

Let me tell you, there isn’t a single family film that’s so incredibly filled with so much destruction and despair as this film was. In it we follow the young warrior Atreyu (Hathaway) who is on official mission for The Empress (Stronach) who’s fallen ill as The Nothing threatens to destroy the kingdom of Fantasia… or so it seems, since Ende applies the trick of a story within a story as we also follow a bullied kid named Bastian (Oliver) reading Atreyu’s adventures.

The NeverEnding Story is a story to celebrate imagination! Despite the changes between script and source material, the (completely distilled) film captures the imaginative nature of (the first third of) its source and adds some of the magic with some Jim-Henson-esque puppets that surprisingly aren’t Henson creations, though the company ended up involved in the third installment of that movie that shall not be named.

The rough edges on the technical aspect of the film aids that feeling of nostalgia, I believe, when things used to be not so perfect and even with a script that’s stretch out, the pacing feels a little bit rushed — with all those issues, I still love the film. It’s the feeling of excitement when you see the Rock Eater for the very first time, or that crushing feeling when you’re seeing Atreyu’s white horse Artax at the Swamp of Sadness (barely at its 30-minute mark!). Feelings of such desperation are never really explored in children’s entertainment, especially nowadays. Though we probably watched this by ourselves (unless you saw it in theaters), The NeverEnding Story is totally Parental Guidance material.

Just like in Peter Pan we’re asked to applaud to revive Tinkerbell and that doesn’t translate quite as well onto the screen, The NeverEnding Story has a similar dynamic while reading the book that isn’t able to translate well for the film, mainly because we can’t interrupt ourselves the way we would while reading the book. However, that doesn’t deter its engrossing capabilities… it’s just a little bit less awesome than the book.

Would I have wanted the movie to include all those bits about Bastian losing a piece of his memories each time he created something for Fantasia? Just adding more darkness into an already grim movie. Overall, the film is a LOT of stressful fun if you’re willing to let your imagination go to accept that with a little luck ;) anything is possible.

You can get Michael Ende’s book on Amazon | The movie is available on iTunes, Netflix, Amazon Instant Video and a pretty worthy Bluray upgrade.