Screaming into the US: Interview with Hollow Jan

While uncountable thousands of Korean pop acts fill the radio-waves & televisions of South Korea, there is one band that’s been fighting to be heard for over a decade. Hollow Jan is alone in their genre, a screamo band that has plenty to say and not enough ears to hear their message. Hollow Jan were the most dynamic act of the night during K-Pop Night Out. I was blown away by their musicality, their range of sound and the pure emotion that they poured into their performance. While in Austin last month the band was kind enough to give me a few minutes of their time. 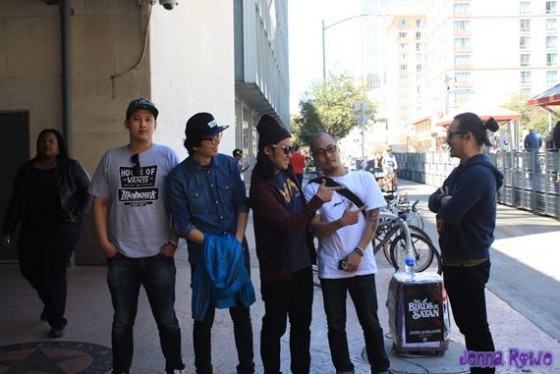 Note: their usual guitarist Kwang Jae Lee wasn’t able to attend, but Apollo 18 guitarist, Hyun Seok Choi, was awesome enough to come and fill in for him. Drummer Myung Hoon Ryu was absent as well.

Will you please introduce yourselves, and say what instrument you use?

After unsuccessfully trying to get temporary guitarist Hyun Seok to introduce himself, we wait for their manager, Vivian to return to help translate.

How has your experience been in Austin so far?