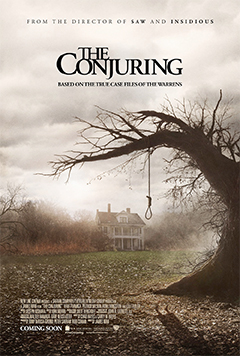 There were many signs leading up to The Conjuring that could have led to it being trash. The abundance of half-assed modern haunted house and possession films and the fact that its writers made the trash known as The Reaping and House of Wax were its biggest red flags. Now, we gather here at this haunted house to welcome James Wan into our arms, thanking him for contributing something actually good to the world of possession horror – a subgenre sorely lacking in great work.

The Conjuring is in part a traditional seventies horror film and in part a telling of one case in the career of paranormal investigators Ed and Lorraine Warren (Wilson & Farmiga). The Warren’s cross paths with a family that is desperate to have the dark presence in their house eliminated, and find themselves drawn into a predicament rougher than they could have ever expected.

James Wan immediately kicks off by confronting his past and improving on it. A doll that would probably make the bravest viewer run screaming if they saw it in their bedroom late at night makes multiple appearances, a much needed improvement on the boring use of dolls in Dead Silence. As thematically similar as this and Insidious are, Wan and his writing team do well to avoid the mistakes that were present in that film’s final act. This isn’t to say that The Conjuring doesn’t get a little wild in its latter half, playing up its seventies roots with exorcism as much as possible, but it’s far from the camp fever dream that Insidious devolved into.

What The Conjuring does right is balance that seventies feel with a genuinely unsettling atmosphere throughout. Its throwback charm comes in the cheesiness that accompanies the story at times and even in its stylistic nature, a tracking shot through the haunted house set to Time of the Season pretty much establishing the period perfectly. At times they even strive to make the house seem like its own menacing character, something reminiscent of the Amityville house.

Rather than rely on an abundance of jump scares – of which there are a few effective ones – the film takes advantage of silence and darkness.  It focuses on what’s not there rather than simply giving you some scary figure to terrify you and even when it does deliver that, you’re still  Those lingering moments of doubt and build up when you expect a scare make for excellent building of tension throughout many scenes. When accompanied by someone like Vera Farmiga who can actually look scared without being over the top, it’s all the more effective, but she’s only a piece of the well-rounded cast that populates the film.

James Wan has had quite the interesting career with horror over the years, with Saw still being his most memorable work so far. And yet, something about The Conjuring feels more mature and grounded, as though he’s learned from his past mistakes. Sure, it still has its fair share of cheese, but Wan nevertheless makes this an often entertaining and nerve-wracking little period film.