Prince of Persia: Sands of Time 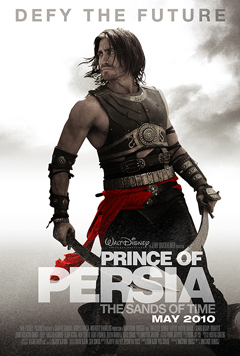 Sands of Time introduces Dastan as a kid living in the streets saving another street kid from being punished by the King’s (Sharaman) men… so, of course, the King sees something special in him and takes him home. Flash forward years, and Dastan — now a hot-looking Prince — and his brothers are about to take on a city that is supposed to be dealing weapons to the Persian’s enemies [hint: weapons of mass destruction].

In their looting, Dastan gets a dagger… THE Dagger (with a capital D), which the princess of the city, Tamina (Arterton), was trying to protect. After the murder of his father the King, Dastan is accused of being the perpetrator and flees the city with Tamina as sort of a hostage and help… but of course, Dastan didn’t do it! So he must clear his name with the help of the Dagger, which uses some magical sand to turn back time.

Unlike the poster (and set of posters), Sands of Time looks very orange. It actually starts with a full shot of a sunrise — or was it a sunset set backwards? — anyway, it was all very reminiscent of Aladdin, so I began singing Arabian Nights in my head… or maybe I did a bit out loud. The caption, set in Papyrus, said something like two people linked together in time — I thought they might have been talking about KidDastan and the other street kid, but seeing as the other kid was left behind when Dastan was adopted… alas, it’s probably Dastan and the Princess whose city he’s about to ransack.

All the title screens with the names of the cities were set in that Papyrus style (at least they weren’t subtitles), with orange and yellow — to be honest, it was very distracting… as I can’t for the life of me remember the name of the city they were supposed to be looting. And I even tried looking up the name, but it’s late… so I don’t want to bother.

When Dastan and the Persians get to where the princess is praying, they take her and uncover her face… and because everyone is so impressed with her beauty, they all WOAH in unison. And Tamina is sassy, she speaks back and is a pain for Dastan, who’s trying to clear his name.

Insert Sheik Amar (Molina), who lives in a place known for being full of murderers and bandits, but he essentially tells us is all PR because he just doesn’t want the Persians snooping around and asking him for tax money. All he cares about is Anita, and the ostriches he has for setting up ostrich races… Molina gets a lot of the funny lines, but he eventually just works as an enabler of men power with Seso (Toussaint), who happens to be pretty big and good with knife throwing. And, oh Sir Ben Kingsley! Why are you always the bad guy in movies now? Is it because Gandhi was too much of a pacifist?

Acting wasn’t necessarily bad, but the dialogue was just too much to take it seriously. The effects didn’t help either. They were average, and sometimes bordering on cartoon-y. Moreover, all this grander than thou action sequences are just so blown out of proportion, it’s just tiring.