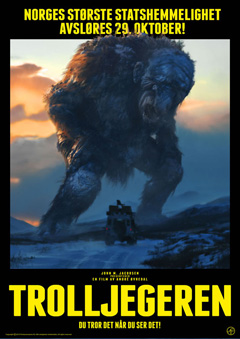 What would you do if you found out that the fantasy stories adults told to scare little kids was actual reality?

That’s the question three journalism students have to face when they begin tracking an illegal series of random bear killings. They bite off more than they can chew when they meet Hans, The TrollHunter (Jespersen).

Hans explains the cons of hunting trolls, who are organic creatures sensitive to sunlight — or in any case, UV rays. When in contact with the sun they calcify and die — or maybe explode. Hans’ science isn’t very precise, but the logistics of trolls is exciting beyond belief.

Some have described TrollHunter as The Blair Witch Project meets Where the Wild Things Are, which it is at first view, if you consider the first a simple documentary-style film and the latter a simple creature film. However, TrollHunter isn’t trying to be scary and it is not dealing with the emotions of a little boy that feels he doesn’t belong in this world. This Norwegian production is one heck of a fun movie, especially if you love Scandinavian folklore and playing around with alternative universes.

Halfway through the film, you might believe that trolls do exist. However, there’s something forced in the ending that makes you ask a lot of questions — something that happens a lot in this type of found-footage genre film. How do these people find the tapes?

The camera work is often dark and shaky, which makes sense for the genre. But if you hate shaky cameras, this type of film is not for you. People accustomed to watching National Geographic or Animal Planet specials should enjoy the biological take on trolls, while conspiracy theorists should love the idea of the Norwegian government hiding their existence from the public eye.

Unlike its Scandinavian cousin, Rare Exports — which also deals with folklore — TrollHunter limits itself by not showing different types of trolls in plain view, as natural as they can be.

My favorite Troll-related question is whether they can smell a Christian, and why.