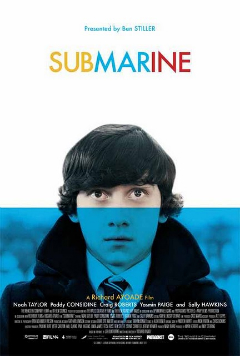 Much has been made of Submarine‘s similarities to the world of Wes Anderson, what with its quirky, understated tics and family dysfunction. But I think there’s more to it than that. Indeed, we just need to remember this is a British film, and its humour is essentially British — the subtle satire of middle-class life, the faintly ridiculous know-it-all narrator, etc.  These are all tropes from British TV and literature, ranging from Reginald Perrin to The Secret Diary of Adrian Mole, right up to Ricky Gervais’ The Office and the works of Dennis Potter.

We were there first, mixing the sad with the surreal, something which most UK films fail to capture for some reason. Whilst British TV has nurtured our best writers, cinema-wise we can only make America-ready rom-coms or undercooked flops like Ali G Indahouse. Submarine therefore is a pleasant surprise, coming as it does from Richard Ayoade, a sitcom actor who made his directorial debut with the cult TV spoof Darkplace back in 2004.

Submarine‘s set in the same era lampooned in Darkplace, that of the 80s, complete with mullets and VHS throwbacks. But the comedy here is of a gentle, wry nature, unconcerned with mockery, and really the film could be set anywhere between the 1960s and now thanks to its wonderfully timeless feel.

This film has some great faces also. Ayoade really has a sharp eye for them, with close-ups of Craig Roberts, all puffy with dead doe eyes; the craggy and limp features of Noah Taylor, and Yasmin Paige’s smirk, a look in her eye so evil, turning ‘gooey‘ with maturity later in the film as her mother’s struck by illness.

Whilst the plot sounds dreary, Submarine is actually outstandingly funny, Ayoade’s comedy background having given him a keen eye for timing and caricatures. Its hero Oliver Tate is riddled with problems – paranoia, ignorance, obsession. He’s no Michael Cera. But, to my relief, Submarine doesn’t forget this to preoccupy itself with your average girlfriend/boyfriend yarn. What I expected to be another comedy of courtship errors actually diverts into hilarious and uncharted territory after setting up its teenage romance pretty early on. Indeed, the film is divided into three parts by intertitles and ominous tones that hark back to Donnie Darko or Von Trier’s Europa, as opposed to anything Anderson-made.

Oliver’s love affair is almost forgotten as he tries to save his parents’ marriage, pushing Jordana into the background when she needs him the most, a brave and rare thing to see in a coming-of-age film (although Yasmin Paige is missed). Coming-of-age rarely relies on romance after all. It’s disappointing then when the climax of the film bottles down once again to Oliver finding happiness with his ‘one true love’ at the age of fifteen. Surely both should know better?

Still, it does all end on a lovely image by the waves of a beach in Wales, and it’s a great masterstroke that Ayoade has an eye on the bigger picture outside of the silly home lives of his oddballs, capturing the beauty of the Welsh countryside whenever possible. My favourite scene of the movie takes place on a bridge beneath which a river gushes into a circular chasm from all sides, the intensity of which is captured in a simple shot both beautiful and terrifying. I have to find that place.