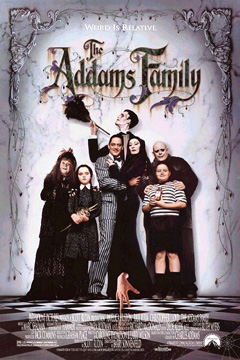 “Weird is relative.” Boy has this phrase changed throughout the years; or maybe it hasn’t changed as much as it has evolved. In a world where people worshiped the ground Lady Gaga stepped on (is that still a thing?) and people praised her Little Monsters- for a moment there, Weird was… pretty much normal. Whereas now we fight for “weird” to be the “new normal,” in the late 90s, “weird” was “weird” and it was okay to be just that.

Crowned as one of the highest grossing films of 1991, The Addams Family was hardly a cult film. Yet, despite its success back in those years, due to its macabre humor, what once was deemed a “family film” has lost favor with modern families that have preferred their children grow with… “safer” entertainment. Well, I guess parents would be weary of a little girl playing with a guillotine. As cute as Christina Ricci was in here playing Wednesday, this rendition of the Addams had to focus a LOT of its running time on exposition and character building, rendering The Addams Family… a little bit boring. Though the scene of Wednesday and Pugsley’s sword fight is still a classic [1].

In the movie, the Addams are a broken family- not in the sense that Gomez (Julia) and Morticia (Huston) have marital problems, because Gawd knows that they have a pretty horny life together, and we’re all privy to it. And it’s awesome. No, the Addams are broken because Uncle Fester has been missing from their lives for the past 25 years, after a fallout with his younger brother Gomez who was trying to hit up on the Amor twins. When the Addams’ accountant, Tully (Hedaya), in financial trouble is unable to get the money to pay his debts, he begins plotting the return of Uncle Fester when he joins forces with his loanshark (Wilson) and her son, Gordon (Lloyd), who has a striking resemblance to the missing Addams.

Of course, the most notable thing about The Addams Family is its art direction, outside Tim Burton, quite uniquely Addams. And then there’s Raul Julia and Anjelica Huston’s sizzling on-screen chemistry, even more humorously during the torturing scene, putting forth one of the sexually healthiest couples on film history — could anyone else name other couples? Though it takes the movie a whole hour to get passed the “getting to know each other”  before Tully’s and Gordon’s Mother plot kicks into motion, the characters are chuckle-worthy enough until that sword fight.

Even if I’m not much into the logistic in films like this, my question is… if Uncle Fester had been strained from the family for the past 25 years of their lives, how do Wednesday and Pugsley relate to him? I’m sure Wednesday is just a smartass bundle of macabre joy, but how is she in all the family — besides Morticia, it seems — get the hunch that Gordon is not Uncle Fester? Logically speaking, she wouldn’t have even met him before this.

In the case of  the Addams, nothing is thicker than their blood. Mamushka!