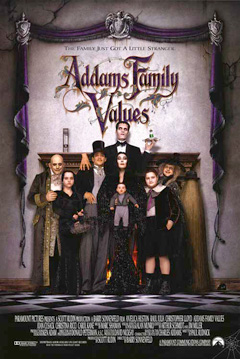 The general rule is that sequels are almost never as good as their first parts, however, that doesn’t seem to apply to Addams Family Values, because unlike its predecessor- dude, this one is a hoot.

After recuperating Uncle Fester (Lloyd) on The Addams Family, and a very late announcement from Morticia (Huston), the Addams were about to welcome a new member of the family: baby Pubert. However, that’s not all. Always titillated by Gomez (Julia) and Morticia’s passionate relationship — Uncle Fester does confess to peaking through keyholes — Fester is looking for love, which he finds when he meets Debbie (Cusack), a black widow who has set her eyes on the Addams family fortune.

Though Addams Family Values does seem more fragmented in terms of storyline, splitting it two-ways with the story of Uncle Fester and his black widow lover, and the kids being sent off to Camp Chippewa, which is perfectly headed by the saccharine neurotic Grangers (MacNicol and Baranski); this movies is ten times funnier. The whole segment at summer camp (during Thanksgiving?) is everything, as Christina Ricci’s Wednesday takes a lead role with the snarky sunshine remarks that we would have learned to expect from Wednesday.

My love for the Thanksgiving sequence, in which Pugsley asks us to “eat him” as Wednesday’s Pocahontas advice us “not to trust Sarah Miller (Mercedes McNab, before playing Harmony)” trumps the lack of interaction that Gomez and Morticia get on this one. I just never truly understood the appeal of Uncle Fester, as awesome a Christopher Lloyd could be. Is that an unfair bias of mine? I do think Addams Family Values is set up for Wednesday as a coming of age story of sorts, in contrast to how young she looked in the first film.

Even though Joan Cusack plays a somewhat sexualized nanny/black widow role, she does it in the campiest of ways, trying to attract some of sarcastic humor that Wednesday just sucks into her storyline. I’m not really familiar with Cusack’s fimogrpahy, but this is by far the only “sexual” role I’ve seen her in, as I’ve often seen her as the kooky or some kind of uptight relative or friend on films.

Overall, despite the lack of Julia and Huston, and the messy storyline, Addams Family Values is miles more entertaining than The Addams Family, which sort of served its purpose to set up the characters.