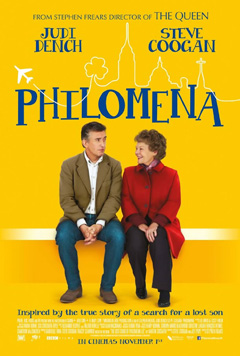 A huge chunk of people that love to write about movies weren’t that enthusiastic for Frears’ adaptation of Sixsmith’s chronicle of a mother and a son in search of each other. Though I did see a lot of positive comments from people that just watch movies to pass the time. The most common line? “I cried.”

The film follows Martin Sixsmith (Coogan), a political journalist who runs into the story of a woman named Philomena (Dench) who has been looking for her missing son, whom she was forced to give away decades before when she ended up as an unwed mother at an Irish Catholic convent in the 1950s. From then on, Coogan and Pope’s script fills this would-be-rather-depressing journey with cathartic drama and subtly charming comedic moments to warm that stone-cold thumping rock some people would call ‘heart.’

The harshest comment on Philomena seems to be that while the film (and most book reviews, if I may add) solely focuses on Philomena’s plight, almost white-washing… or straight-washing Sixsmith’s book The Lost Child of Philomena Lee which is, in fact, prominently about Michael’s life as an adopted child and the struggles with his sexuality. I’m going to be the devil’s advocate here, I do believe  that the other narrative would have limited the appeal of the story targeting LGBT audiences looking for a story that mirrors theirs. The switch in point of view hits general audiences with all the emotional cues and might avoid the whole “preaching to the choir” sentiment, they might all come out being slightly better human beings.

Dame Judi Dench is pitch-perfect as the slightly overwhelmed Philomena, making your heart leap when she sees a glimpse of her grown-up son in the same photo as the man who’s standing in the room with her. A tiny droplet of faith that gets her mind whirling ten thousand miles per minute about what Michael might have been like. She turns your heart into mush with her nonchalant acceptance of her son being gay, nudging at the fact that “a mother always knows.” Going into the film without knowing anything on it (other than Dench being good) had me thinking her rather traditional character could have gone onto deny Michael’s homosexuality and find closure with acceptance. That clearly wasn’t the case.

Philomena hits you hard and tears your heart apart with the final realization that mother and child were always looking for each other against not only the hand of destiny, but also bad human beings. While the film makes it look awfully black and white and slightly manipulative — there’s always this huge debate on whether adopted children should be happy or scarred for life — it’s impossible not to be moved by this tragedy, which doesn’t end on a down note, instead, it makes your heart lighter and lifts your spirit.

I don’t think we watch Stephen Frears movies because of his visual style or vision; he’s an actor’s director. His work on Dangerous Liaisons, High Fidelity, Dirty Pretty Things, Mrs Henderson Presents, and The Queen are a testament to that.