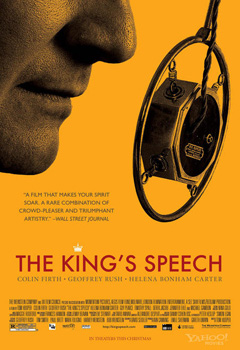 Of course we couldn’t keep ourselves from reviewing this.

The King’s Speech is a throughly enjoyable movie about King George VI (Firth) — not yet crowned then — and how he got through his stammering problem with the help of a very unlikely aid (Rush)… and a lot of work.

Not sure if it contains a lot of drama, though if others feel this was a drama, I really can’t pinpoint a particular event that was etched in my memory. There are, however, a lot of charming and funny bits of dialogue… especially with an English accent and a stammering problem. Everything can sound charming in an English accent… and anything could sound funny with a stammer.

We certainly don’t want to make fun of people with speech impediments, but in the film it got to a point when it got tiring. It was way before he made any effort to get better, and before the King (his father) passed away.

I really felt like his father and wanted to tell him to get it out already! However, the banter between Firth and Rush — and actually, any other character — was nearly to die for.

Despite it’s feel-good intention, The King’s Speech is just a movie about a man that overcomes his stammering. He didn’t really do it for his nation, it’s not a life-altering film. It’s enjoyable, but quite forgettable. Deserving of some praise? Of course, but not enough to guarantee a sweep through the awards.