Satellite Girl and Milk Cow, The 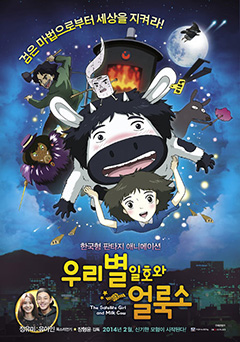 Throw logic out of the window, we’re about to embark on a hilarious head-scratching journey with a no-longer in orbit satellite and a cow. And there’s a toilet paper roll (embossed) that talks!

Launched into space nearly two decades ago, satellite KITSAT-1 (Jung) studied the lives of the Korean peninsula inhabitants until it stopped working, but found new life as she heard the song of street-musician named Kyung-chun (Yoo). On a weird magical night, the KITSAT-1 dropped to earth as a comet, transformed into a girl (retaining her metal structure and functions), who calls herself Il-ho, and meets a scaredy Milk Cow escaping with the help of a magical toilet paper roll (Lee) from a re-animated giant incinerator looking to devour all broken-hearted humans that have been turned into anthropomorphic animals.

Oh, and there’s an organ trafficker who wants to get the Milk Cow’s liver. Because- WHY NOT!?

If you go in The Satellite Girl and Milk Cow quite blind, like I did, you’ll find yourself asking what IS going on because a talking toilet paper roll might stretch our imagination quite a bit, even for a child-friendly movie… or maybe because it’s child-friendly. After all, there IS such a thing as Aqua Teen Hunger Force. The results is, of course, quite hilarious at times and incredibly awkward at others (eg. when the gang realizes they need money, so it’s decided to milk this male cow with utters showing and all). Awkward~~~

Underneath the organ trafficking, the magical form-shifting and the toilet humor, however, The Satellite Girl and Milk Cow is trying to tell us something about love and loneliness that gets lost in all the explosions and running around. There are, however, a couple of sweet moments between the two when Kyung-chun refuses to let go of Il-ho’s flying hand and the little peck before the final showdown.

Animation-wise, it’s got some good moments, but it just felt like a long episode of a (no longer available) Saturday morning cartoons, nothing out of this world like Aachi & Ssipak, despite dealing with something literally out of this world.