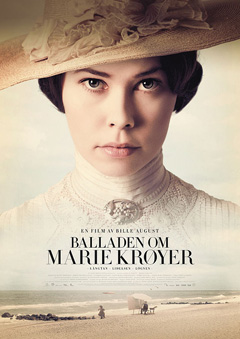 Marie Kroyer is the typical film expected from a filmmaker such as Bille August. Taking into account his previous works, it’s easy to conclude that period dramas are the genre that he feels more comfortable with. Pelle the Conqueror (awarded at Cannes, Academy Awards and Golden Globes), and The Best Intentions, his biggest hit so far, confirm exactly that. This new feature film depicts the relationship between the Danish painter Marie Krøyer (Sørensen) and her husband painter, Peder Severin Krøyer (Sætter-Lassen).

P.S. Krøyer, as he was known, became the most influential and respected painter of the movement called Skagen Painters [1], a community of Danish and Nordic artists formed in the final decades of the 19th century. The Krøyer couple seemed to live happily in fame and wealth. Marie was his muse, and her beauty didn’t go unnoticed. After a while, we sense that this happiness wasn’t so perfect, but rather apparent. The couple’s daughter, Vibeke (Vera Torpp Larsson), showed a terrible fear of her father, while Marie was showing visible signs of fatigue. This was provoked by the frequent bouts of mental illness that he was suffering. Unexpectedly, his personality changed to a hallucinatory state, and he often became a threat to his family. Moreover, a constant tension was always present due to Marie’s dream of also becoming a painter. Her feelings were constantly hurt by her husband’s egocentricity.

The talented painter was regularly subjected to treatment in a psychiatric hospital for considerable periods of time, in order to recover from his crisis. Marie was absolutely indispensable to him, showing her love, support, and understanding. Their relationship started to collapse, especially after a couple of incidents. Firstly, when Peder paints a family portrait at Skagen’s beach with a dog instead of his daughter. To make things worse, he humiliated her in front of some Parisian visitors who came to see his work. This particular scene proved to be simultaneously hilarious and sad. Secondly, Marie falls in love with the Swedish composer Hugo Alfvén (Gudnason), after going on a small trip to Sweden. She decides to accept her love for Hugo, making clear her intentions to leave Peder, but is soon faced with another issue: according to the law, she loses her daughter’s custody.

Struggling with despair and dependence, Peder comes up with a strange agreement: Marie was allowed to bring her lover to Denmark and be with him during the day, while at night she must return back home. Needless to say this situation didn’t last for much longer.

Marie Krøyer revealed competence and ability to entertain due to a refined ambiance and solid performances. It is not completely unpredictable or devoid of flaws, presenting coldness in moments that were asking for some more emotion. Yet, considering its story and genre, I truly believe it wouldn’t be easy to adopt a better approach in direction or create further excitement.