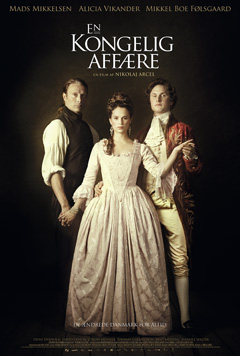 Nikolaj Arcel’s A Royal Affair follows the story of a young queen (Alicia Vikander) who is married to an insane king (Mikkel Boe Følsgaard). When a new physician (Mads Mikkelsen) is appointed to help keep the king’s madness at bay, the queen finds herself swept into an affair. Together, the queen and physician begin to enlighten the country with ideas of freedom over censorship by manipulating the king, but a forbidden romance can only last so long before the consequences come rolling in.

One of the many appealing factors of A Royal Affair is the fact that the characters are easy to feel compassion for, unlike characters in plenty of other stuffy period pieces. The sheer awkwardness of the king and queen, two entirely unfamiliar people, meeting after being married for some time is shown from the start. We can instantly see the king’s childish nature and the queen’s hesitation to love this insufferable man she has married.

What makes Vikander’s performance so appealing is the pure emotion she brings to the role of the queen in good times and bad. Her supporting work in the recent movie Anna Karenina was a great start, but she leaves quite an impression with her role in A Royal Affair.

In turn, Følsgaard is outstanding as the raving king alongside the ever entrancing Mikkelsen, who American audiences will remember for his stint as a Bond villain in Casino Royale. The bond that forms between their two characters is what drives the film, and convincing performances from both men make it all the more difficult to choose whose side to take when things get tough.

Regardless of excellent performances, this lengthy period piece comes with faults. The film boasts impeccable production design, but a pretty look doesn’t excuse letting a film drag on. Thankfully, the final act delivers the film’s darkest and most fascinating moments in one fell swoop, serving as a refreshing treat to a lagging middle act.

While it does suffer from some of the same pacing issues that many a period piece do, Nikolaj Arcel’s solid direction, a mostly compelling narrative and all around excellent performances make A Royal Affair quite the worthy contender at the Oscars this year.