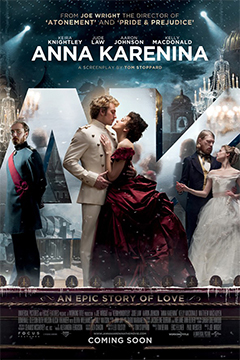 Based on the classic Russian novel, Anna Karenina is a tale that tells of love in all its beautiful and tragic forms. Anna (Knightley) is an aristocrat married to a government official named Alexei Karenin (Law). After helping her brother (Macfadyen) and his wife (Macdonald) with an issue of infidelity, she finds herself meeting the charming Count Vronsky (Taylor-Johnson) and falling into an affair with him.

More than enough film adaptations of Leo Tolstoy’s Anna Karenina have been made over the years, and it makes one wonder what makes Joe Wright’s any different. Rather than deliver what could have been a stuffy adaptation, Wright teams up with screenwriter Tom Stoppard to create a world of their own by ignoring the rules of storytelling and making this a theatrical show of sorts.

Playing out like a Russian ballet, which is undoubtedly what inspired Dario Marianelli’s lovely score, Wright and Stoppard quite literally set a stage for Anna’s story to be told on. The sets and costumes constantly change, and the transitions between scenes are often accompanied by actors who flow through for mere moments, serving only to dress the stage for the upcoming scene. Of all the positive things that can be said of Anna Karenina, the most important is the gorgeous production and costume design that helps make this story so vivid and appealing.

From the very beginning it feels as though Joe Wright has created a love child between Baz Lurhmann and David Lean’s work, and while that sounds like a bad thing, it’s far from it. Memories of Doctor Zhivago [1] will be sure to come crashing down on viewers when they see these characters standing in snowy Russia when not on stage or indoors. As the film goes on, this show of the stage becomes less prominent, and that can be attributed to the immense changes in Anna’s life. The less she must perform in front of those around her, the less she needs this stage for her story to expand.

Anna proves to be yet another brilliant period role for Keira Knightley to sink her teeth into. Her work with Wright never ceases to impress, as those who have seen Pride & Prejudice and Atonement well know, and she truly embraces Anna’s best and worst qualities. While the film is her show, her lovers do a fine job as well — Jude Law as the stony bureaucrat and Aaron Taylor-Johnson as the warm officer.

Accompanying Anna’s story is that of Levin (Gleeson), a farmer who dreams of marrying Anna’s brother’s sister-in-law (Vikander), and it is one that provides an interesting contrast to her tale. While the film handles the stories it tells well, its length is unfortunate, as things begin to take a boring dive in the last third. Adapting a novel as massive as Tolstoy’s Anna Karenina perfectly is almost unfathomable, but Wright’s admirable attempt is at least undeniably gorgeous and well-acted.