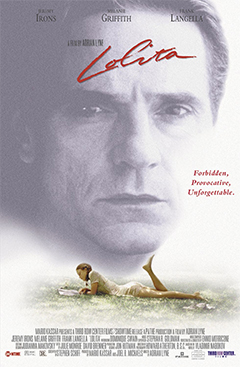 Many already know the story of Vladimir Nabokov’s novel Lolita, with its famous lines:

Lolita, light of my life, fire of my loins. My sin, my soul.

For those unacquainted with Nabokov’s novel, or even Stanley Kubrick’s 1962 film, the story of Lolita is one of man madly in love with a young girl. Humbert Humbert (Irons) is a professor who has come to the US to teach and write. When he moves into the house of the widow Charlotte Haze (Griffith), he finds himself completely infatuated with her young daughter, Dolores ‘Lolita’ Haze (Swain).

With the lack of a censorship code and the stellar chemistry between Irons and Swain, Adrian Lyne can make this into exactly the movie that Kubrick couldn’t. Of course, many will disagree with this statement, but Lyne’s adaptation of Nabokov’s novel tosses subtlety out the window and lets itself get uncomfortable. There’s a striking realism to the way Lyne crafts the romance between them and keeps it as serious as possible, with a few light moments mixed in, and it’s that realism that makes the film so effective.

Lolita isn’t meant to be the great romance of the century, it’s meant to be creepy, and by playing it straight, Lyne achieves that creepiness. This isn’t to say that certain scenes are a bit too far out there, like a few of Langella’s first scenes that almost try to dive into out of place horror, but overall, Lyne’s vision gets through with the help of some beautiful camera work.

The film’s biggest success comes from not forcing a judgmental lens of the character of Humbert. By allowing the novel’s unreliable narrator to take us deep into this journey of depravity disguised as romance — which is helped along by a sometimes romantic, sometimes mysterious score by Ennio Morricone — we get something that’s arguably far closer to the novel than what Kubrick made.

There’s always something utterly fascinating about watching Irons play a disturbed sort of individual. While Humbert Humbert may not be as mad as either of the twin brothers in something like Cronenberg’s Dead Ringers, there’s the constant unsettling reminder that this man is doing something incredibly wrong. The way he stares through doors and past corners just to get a glimpse of Lolita from the very start, who is played impressively by Dominique Swain, is chill inducing, and it all seems so effortless coming from him.

However much Humbert Humbert dreams of Lolita being his grand romance, the film Lolita is far from just that. Regardless, it is still an incredibly interesting, unsettling, and engaging watch.