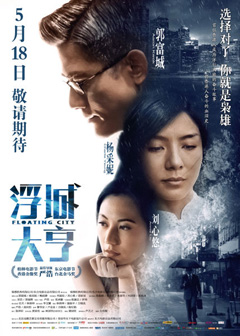 Race, nationality, minorities… it’s always a problem when a story or a movie tackles the issues stemming from the perceived majority, in the case of Ho Yim’s feature Floating City.  The film chronicles the life of Bo Wah-Chuen (Kwok), an adopted mixed-raced child who is taken by a Tanka [1] family — a group of people that have traditionally lived on junks in Southern China — in order to inherit the family’s vessel as the elder son.

Set in Hong Kong, from the 40s until the late 90s and the Hong Kong handover, Bo Wah-Chuen and his poor adoptive family struggle to find him a place in society — often being put down and mocked as a “half-breed” by the Tanka people, the Han Chinese and the British. Bo Wah-Chuen then decides to climb the ladder of social status, as he makes his way through the corporate hierarchy to become a Tai-pan [1] at the Imperial East India Company, with the hopes of becoming an outstanding British citizen only to find out he’s not.

The elephant in the room, of course, would be that Aaron Kwok doesn’t look remotely like a Chinese-Caucasian mixed-race man — though the casting of the baby and the boy-version of Bo Wah-Chuen were onto something. However, I haven’t heard of casting uproars over it, so that’s Hollywood for you. Though Kwok seems to be missing that emotional punch to make you believe the identity crisis he’s going through throughout the whole film — “who am I?” — the story still holds a certain meaning for anyone who has been through the turmoil of trying to fit in, especially regarding people of mix-heritage or people trying to make a better life for themselves. Floating City is partly a bittersweet success story when considering how big the role of Nina Paw Hee Ching, Wah-Chuen’s mother in old age, is for the emotive core of the story.

Though we could look down on some of the actions of Wah-Chuen during his professional life and how some of these decisions negatively impacted his younger siblings, his mother or would-be wife Ah Tai (Yeung), these are the obstacles that make that sentimental pay-off by the end of the film palatable, especially in Ah Tai’s lack of character arc.

Overall, though, Floating City seems rather disjointed — jumping from one year to another, backwards and to the future again — and dragging or pointless at moments, so it might bore audience not willing to stick around. Plus, the intro of the storm is atrocious. It’s probably the cheapest scene in all the movie and might turn off audiences straight off the bat.

There’s some pretty nice acting from Nina Paw Hee Ching and Charlie Yeung in the film, and as per Asian production standards some rather dismal acting from the “Western” actors.