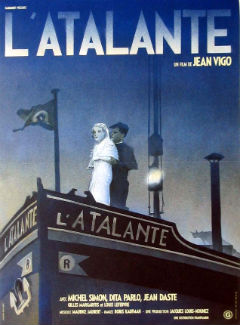 One of the most influential films of all time, Jean Vigo’s L’Atalante is also the director’s only feature film (he directed three short films of 9, 25 and 41 minutes, respectively). Vigo died of tuberculosis at the age of 29.

L’Atalante tells the tale of Juliette (Dita Parlo), who just married Jean (Jean Dasté), captain of the barge L’Atalante. While en route from Le Havre to Paris, Juliette befriends first mate and cat lover Jules (Michel Simon). Tension ensues and when they arrive in Paris Julliette runs away. Disgruntled, Jean decides to leave her there, while Jules tries convince his captain to go back for her.

While the plot seems like an average melodrama, the performances from the three leads, as well as Vigo’s avant-garde filming techniques elevates this film to something greater.

Filmed over 75 years ago, L’Atalante is filmmaking as an art at its finest. Vigo, who was a pioneer of underwater photography (see Taris, roi de l’eau), collaborating with cinematographer Boris Kaufman, best known for his work on such Hollywood films as On The Waterfront, creates a film filled with esoteric and almost haunting shots of unspeakable beauty.

A favorite of French New Wave filmmakers, such as François Truffaut, the influence on that generation of directors is palpable. Mixing fantasy with realism, L’Atalante is an important film that will be enjoyed by students of cinema and casual movie lovers alike.