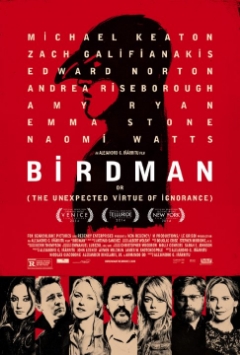 Though it’s obvious by this point that viewers have found much to admire about Alejandro González Iñárritu’s black comedy, Birdman —and rightly so, in my opinion—I can’t help but feel that one almost has to have some familiarity with Michael Keaton’s career to fully appreciate this clever meta-commentary on actors and the pitfalls of fame and ego.

Keaton, the (once-controversial) star of the first two installments of the initial Batman film series—Batman (1989) and Batman Returns (1992), both directed by Tim Burton—reportedly turned down $15 million to reprise his role in the more audience-friendly third installment, Batman Forever (1995), now with Joel Schumacher at the helm. Despite Quentin Tarantino’s best efforts, the career of this talented actor would never be the same. He didn’t appear in movies for years at a time, and many of the films he did do barely made it to the theaters. Other than Multiplicity (1996) and, perhaps, Jackie Brown (1997), the aforementioned QT masterpiece, most people would have trouble remembering anything Keaton has starred in over the past two decades.

Riggan Thomson, the narcissistic character Keaton embodies in this film, is the former star of the billion-dollar-grossing superhero tent-pole “Birdman” movies. He turned down “Birdman 4” in the early nineties due to artistic reasons, and has been languishing both personally and professionally ever since. He is haunted by the voice and vision of the Birdman character who continually reminds of the celebrity he used to be. Now, in a bid for artistic credibility, Thomson is trying to mount a Broadway adaptation of Raymond Carver’s short story, What We Talk About When We Talk About Love, in New York’s historic St. James Theater. It’s safe to say, however, that Keaton was never as self-obsessed as Mr. Thomson.

But things aren’t going very smoothly to say the least, thanks in no small part to Thomson himself. He stages an accident to eliminate an important cast member he doesn’t think very highly of. His replacement (an excellent Norton, who also played, and had his share of troubles with, a superhero in 2008’s The Incredible Hulk), a popular and expensive theatre actor, turns out to be a prick (pun intended). The money is running out. The previews are going badly. The two stage actresses –the film’s least interesting characters, though well played by Watts and Riseborough– are about to go off the deep end. And the tangential presence of Thomson’s fresh-from-rehab daughter (Stone), his wronged ex-wife (Ryan), not to mention a barbed Times critic (Lindsay Duncan), certainly isn’t helping.

The Mexican-born Iñárritu is best known for films with complex, overlapping, fractured narratives, often rendered with shaky hand-held camera, grainy texture and saturated colors. His so-called “Death Trilogy”—Amores perros (2000), 21 Grams (2003), and Babel (2006)—scripted by former collaborator Guillermo Arriaga, has its share of champions, but these stories about the universal need for connection inevitably get bogged down under their own thematic weight. I imagine Birdman could have been written and structured in a similar manner, as it’s a fairly common approach for behind-the-scenes satires such as this.

But almost in a defiance of his own formal and aesthetic conventions, Iñárritu, working with the great cinematographer Emmanuel Lubezki, has shot (and assembled) the film in a manner that it appears to consist of one long continuous take. Impressive, considering how frenetic the film is at times. It allows us to be with Thomson and the world within and around him unremittingly. Unlike Hitchcock’s Rope (1948), which has been mentioned as a comparison, the proceedings in Birdman aren’t confined to a single set. Some viewers will likely recall Sokurov’s Russian Ark (2002), which was in fact shot in one take, and the work of Hungarian filmmaker Jancsó Miklós. Given the extended and meticulous use of steadicam, I was also reminded of the films of British director Alan Clarke, which similarly featured their share of walking.

As you may have heard, however, Birdman wouldn’t be the same without such a committed and revelatory performance by Keaton. It’s hard to blame him for asking Iñárritu whether he was trying to make fun of him when they initially discussed the project together. To their credit, Thomson is neither softened nor does he at any point beg for our sympathy. Thanks to Keaton, he is demanding, restless, ferocious and touching all at the same time—not unlike the film itself.