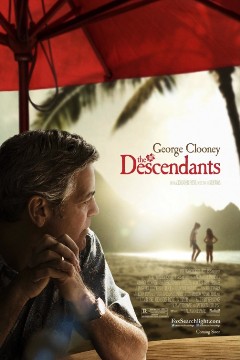 Let’s be honest: the idea of Alexander Payne (About Schmidt, Sideways) and George Clooney working together sounded great in theory. But the execution of said idea in The Descendants wasn’t all that great.

The Descendants starts like Payne’s Election and every season premiere of HBO’s Hung: with narration. The narrator, Matt King (Clooney), is a man whose wife, Elizabeth (Hastie), remains comatose after a boating accident. The accident sets up Matt reconnecting with his two daughters, 10-year-old Scottie (Miller) and 17-year-old Alexandra (Woodley). Reconnecting isn’t easy. They didn’t spend much time with their dad growing up because he’s a workaholic lawyer.

Life changes for Matt once he learns that his wife cheated on him, leading him to find the truth about it with his daughters and Alexandra’s boyfriend, Sid (Krause).

Given the sizeable amount of awards buzz surrounding The Descendants, I wished I could say that I loved the film. Unfortunately, I didn’t. Don’t get me wrong, the film is easy to watch thanks to its great use of dark humor, the acting, the music and the beautiful landscape of Hawaii — assets that could make a film look great. However, the dramatic parts weren’t all that great thanks to the script, which comes across distracting and logic-defying regarding some of its elements. There were moments in the film that Hawaii felt like a bigger star than the rest of the characters. The Descendants gets sidetracked with a storyline about Matt inheriting a massive piece of island — the film’s title comes into play here — and having to decide to sell it to a buyer before his ownership expires.

The supporting cast is actually great. Shailene Woodley had a star-making performance in this film and played the part of the older, complicated daughter well, displaying emotional range with ease. Robert Forster was great as the asshole father-in-law. Nick Krause provided good comic relief and evolved nicely from generic jackass to a reasonable guy despite Sid ending up being a part of Matt’s storyline for logic-defying reasons. Judy Greer, who plays the wife of the man (Lillard) who slept with Matt’s wife, was a delight to watch despite her few minutes of screentime.

But what about George Clooney? He was good, but not great enough to deserve winning an Academy Award for Best Leading Actor. Casting Clooney as Matt King ended up being a problem. I thought Clooney wasn’t convincing at making Matt sympathetic. Most of Matt’s feelings are internal and Clooney doesn’t pull it off very well when compared to Brad Pitt in Moneyball. During the film, Woodley and Greer showed better emotional range than Clooney, who only managed to make me feel bad for him near the end of the film.

In the end, The Descendants is just alright to watch at least once. Maybe you’ll enjoy it more than I did, it has some great stuff here and there. But I think it could have fared better if someone like Paul Giamatti, who previously worked with Payne on Sideways, played the Matt King role instead of Clooney.