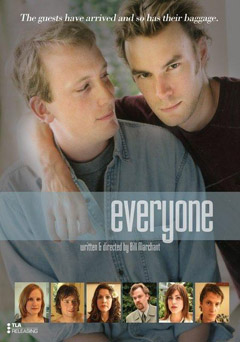 I’ll give you this — Everyone is not for everyone.

Though labeled a comedy [IMDb, why so misleading lately?], Everyone is more a drama with comedy thrown in between.

The story begins on the wedding day of Ryan (Fentiman) and Grant (Hildreth) for which they can’t even agree on what to call the day. It’s supposed to be a happy day, but it turns out that three years prior to that very same day, tragedy had struck the family. Everyone is mad and having issues, except for Ryan’s mother (Billings) who’s picked up a stinky punk from the bus stop named Dylan (Fletcher).

I don’t know what Everyone is, but I’ll tell you what it’s not — it’s not a romantic comedy. You are not getting a happy ending neatly tied for each and everyone of the characters. This is not a family drama that ends with everyone realizing they’re crazy normal. This is not a good-feel movie, and I would dare to say that the film deals with serious topics such as deaths, eating disorders, and compromise in a pretty darkly humorous fashion without ever forgetting the gloom.

The acting was okay, we can possibly highlight Fletcher’s performance as the flirty stinky punk, while Carly Pope’s bartender character’s rants about how much she loved the gays, and how she was a gay back in tenth grade were pretty hilarious. It makes sense, in a way, considering the role was written for her after she took the role of co-producer.