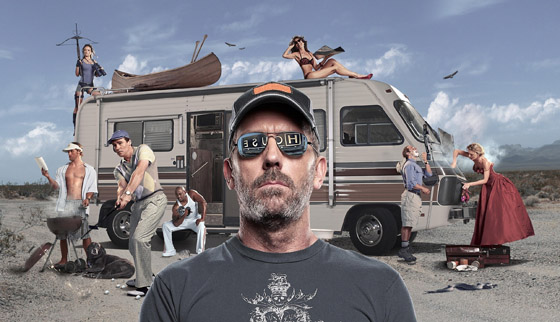 The sixth season of House M.D. started out with a bang with a two-hour special of House in the psychiatry ward with a bunch of crazy people, but House was still a jerk, so it was a lot of fun. He even got to get it on with Lydia (Franka Potente). All in all, the first episode looked like a really stylish episode, or that’s how the show would look like if it gets a movie deal. However, it was a bummer that scattered episodes looked like they ran out of the budget to make the season opener look good.

Also, I must address this. When are they changing the opening titles? I thought the exit of Morrison as a cast member would warrant a new one.

During the course of the still on-going season, House has been nicer than he has ever been, making me wonder if the show should make plans to end this season or next to counter the risk of going stale. After all, even though we are in favor of character development and catharsis, NiceHouse is not as fun to watch as JerkHouse.

The writers have also been trying to develop the rest of the characters, but it’s really amazing that they have failed to deal with Foreman… even when they’re trying to make him do something nice, he sounds like an idiot. Unlike him, they made pretty exceptional work with Chase, especially during the episode The Tyrant.

Some of the best of the season have been episode The Down Low, the sociopath on Remorse, and Morrison’s last episode on the show, Lockdown.