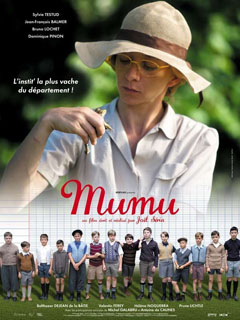 Mumu tells the story of a little kid named Roger (Dejean de la Bâtie) who has trouble adapting to school because he finds it impossible to live by his strict father’s expectations, until the day he reaches the class of Ms. Mumu (Testud). Ms. Mumu is one tough teacher. She screams at her students, belittles them, sometimes throws things at them to call their attention… her students fear her. It’s amazing.

Sylvie Testud plays Mumu brilliantly in a quiet, campy way. The insults she delivers for the little kids can leave you with your mouth wide open, and at the same time leave you rolling on the floor. I really didn’t know if I was supposed to be watching a full-on drama or if I was meant to laugh at it. Though, laughing at someone being mean to little kids is a hard one to pull off.

However, Mumu isn’t all bad. She really REALLY cares for Roger as a student, but he keeps making it difficult every time his parents don’t want to visit him for the weekends — they even left him in school during Easter!

When Roger seems to be a good student, capable of learning — and smarter than most his classmates — Ms. Mumu tells him that there’s hope for him, and she takes the time to guide him hours after class, teaching him. Mumu really wants him to succeed, but Roger keeps pissing it away, and Mumu gets mad at him.

Except for that bit where Roger’s friend shows him how his mother showers — that little pervert — and the questionable part where two little kids make out with two little girls on a barn (LOL), I would show it to my classroom — if I had one — so they can appreciate me as a teacher.

Though… really, Mumu is one tough broad. xD

This film, however, won’t go over well with an American audience… because if Mumu were American, she’d be on the news for abusing these kids. Tough love, I tell you! I had a couple of those, and I turned out really proper. xD