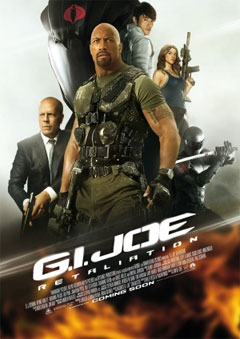 G.I. Joe: Retaliation is way more enjoyable than G.I.Joe: The Rise of Cobra. That’s not to say it’s perfect, not at all.

The story starts with the state of the “Joes” (and the country) after the events of previous film. All seems fine for our heroes, both in the professional and personal lives. But, if you remember what happened in G.I.Joe: The Rise of Cobra, there’s a viper in the mist and the “Joes” are betrayed. All but a handful die, and the survivors have to plan and retaliate against Cobra, who are even more devious in their world domination plan.

Of the three “Joes” who survived the attack, only Dwayne Johnson as Roadblock manages to grab your attention. Maybe the few moments of camaraderie with Duke (Tatum) did their work. But Cotrona and Palicki were just adequate and even their bonding moment didn’t help. Palicki did have better chemistry with Willis, who is the original “Joe”, though. Completing the team we have Park as Snake Eyes and Yung as Jinx. They feel slightly out of place since they have a parallel agenda concerning villain Storm Shadow. Their fighting scenes, though, were the best part of the movie.

On the other hand, while the villains may have not been that interesting before; in G.I. Joe: Retaliation, their qualities, from their physicality, abilities and actions, made them fascinating to watch. And if they got hammy sometimes, it was not at inappropriate moments. Visually speaking, this time Cobra Commander actually looked, moved and sounded like Cobra Commander. Sorry, Joseph Gordon-Levitt, but you were a terrible Cobra Commander. Acting-wise, the one who did a better job was Jonathan Pryce as both the President of US and as Zartan impersonating the President. He surely was having fun being evil. The other notable one was Lee Byung-hun who came back as Storm Shadow. He didn’t have to do much acting before, since he was there to be a cool ninja, but they gave him a back-story here and while it didn’t make much sense, he did a decent job at showing suppressed feelings.

G.I. Joe: Retaliation looks great, and has equal parts of awesome involving tech-weapons of all sizes, good old guns and hand-to-hand combat. But don’t expect to find a compelling story-line.

By the way, I saw this movie in 3D 4DX, so besides having ninjas falling on my face, I also felt The Rock’s fist on my back and the wind of assorted ninja weapons passing besides my neck. Good times!