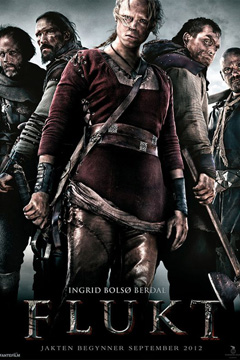 I am in no way well versed enough in Norwegian films, as I’ve only seen but a handful of them, but an action film starring a little girl is just something I can’t pass up.

Ten years after the plague swept the land, a sole family is on its way when a group of bandits attack them, killing them all but their young daughter, Signe (Andreasen). Taken to their place of rest, the leader of the group Dagmar (Berdal) informs Signe of the terrible fate that awaits her, but she’s not counting with the assistance given by little Frigg (Olin) who will aide Signe in her escape.

The introduction to Norway’s Flukt is an intense one, that with the aid of some slo-mo sequences delivers emotionally as we witness the death of each one of Signe’s relatives. It doesn’t get better for her as Dagmar’s message hits you like a bucket of cold water, and Ingrid Bolso Berdal is downright badass frightening as the eyebrow-less rogue that’s even feared by her humongous lackeys. The desolated locations aided by the cold cinematography just aids to that feeling of despair of this fast-paced action drama, which brought memories of Hanna into my subconscious. However, besides having a little girl as a protagonist, they have little in common.

Plot-wise, similar issues arise with the suspense of disbelief as we’re to belief that Signe could take on Dagmar’s lackeys who tower over her. But I was game for it, it did deter my enjoyment of the film as there wasn’t any long period of time to improve survival skills, and we were given scenes where Signe got away by mere chance. Though the script lacked coherence and supporting characters weren’t fleshed out (I really can’t name any of the guys), I did think that Dagmar had a decent build-up, even if she was the antagonist of the film. Andreasen and Olin played it well with what they were given, even if some of the actions their characters did during their escape makes you wonder about the reason of their choices — maybe it was a smart decision to look for shelter in Norway? Maybe it is feasible that two girls would think hiding in the only cabin in all the mountain would be a good idea. I’m not a girl in the 1300s Norway.

Flukt is… a little bit violent, there’s blood, and it could be quite scary for little kids but a PG-13 rating would suffice. Plus, the reason Signe was kidnapped might arise some questions. The action isn’t ground-breaking — so action-buffs might want to stay clear — but it’s competent without any glorification of it. If you’re gonna watch it, do it for Berdal.

That’s my DVD/Poster blurb right there: “Ingrid Bolso Berdal is downright badass frightening as the eyebrow-less rogue that’s even feared by her humongous lackeys. If you’re gonna watch it, do it for her.” Please, someone take note of it.