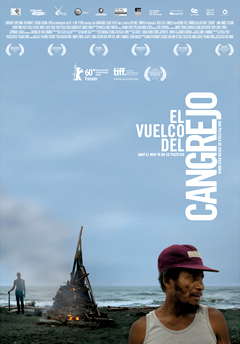 Crab Trap tells the story of Daniel (Rodrigo Velez) and the relationship he has with La Barra, a little black community in Colombia’s Pacific coast. In it, he meets with Cerebro (Brain), the leader of the Afro-descendant natives who are having territorial issues with a white man called El Paisa, who wants to build a hotel on the beach.

The film is a little over one and a half hours, even though it feels it could hit the two hour mark. It’s slowly paced with decent performances from the main cast — even if some of the scenes and situations felt forced. The most interesting part of the film is, perhaps, Daniel’s relationship with Lucia (Yisela Alvarez), a little girl he befriends in the community. Other than that, I did not care about him as a character, so I didn’t care for what he was looking for or whether he would get it.

Cerebro’s struggle with progress distanced me even further from the story, when you had other characters that didn’t have issues with it. Cerebro’s antics just end up childish because he’s not comfortable with things changing. However, I will give admit something — El Paisa playing his damn Reggaeton music every night was annoying.