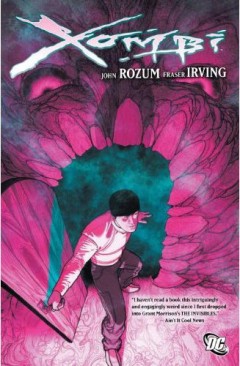 Is David ‘Xombi’ Kim the world’s only Korean American superhero? He’s most certainly the first, with the nanotech immortal having made his first appearance way back in 1994. That series was put out by DC imprint Milestone until ’96, when it was ultimately proven that even the indestructible still fall victim to cancellation.

Yes, just the six issues I’m afraid, cos once again DC tolled the bells in order to make way for a whole new wave of comics starting from scratch, rewinding even legends like Superman back to issue#1. This tempts me to say that perhaps Rozum had to condense a lot of backstory and exposition to bring us to a rushed conclusion, but I’m not sure — even as far back as the first issue you find each of his panels bursting with ideas that could easily take up whole issues on their own.

Time was also a deciding factor against the revival. While characters like Nun of the Above and Catholic Girl are quick to get a handle of, I still felt like I was out of the loop when it came to the baddies and what they were exactly up to. The main villain is supposed to carry some gravitas, but he’s just your average smug dick in a sharp suit to anyone without the ’90s knowledge. As nothing much is conveyed, the plot never really puts across any emotional investment Kim has with this nemesis, which is a big fault considering Xombi‘s (second) final bow lacks any kind of catharsis to end things.

Rozum seems to have trouble balancing his wonderful imagination with actual nuts ‘n’ bolts pacing. Three issues center around one fight scene; another is mainly comprised of someone or other talking for 20 pages in an exposition overload that even the usually untouchable Irving couldn’t figure out how to spice up. He offers lots of disembodied talking heads as some kind of consolation, sad considering how his other pages glow with talking coins, giant flying skulls and Del Toro-esque beasts.

As you may have gathered, Xombi ain’t a gritty, sombre Bats affair.  Nor is it a mindless Good v Evil fantasy like Green Lantern (who, by the way, Xombi once filled in for). Ignoring its plotting and obtuse nature, Xombi still stands out as something all its own: intellectual, existential, supernatural. And even with its maddening miasma of magic, the best moments are the ones which remind us that Kim will always be more human than zombie, little touches like when he reminds an immortal foe that life is only worth living when loved and in love, or the ending where we end up back in his apartment, a simpler world where he’s happy to stay until Xombi‘s recommissioned again. See you in another 15?