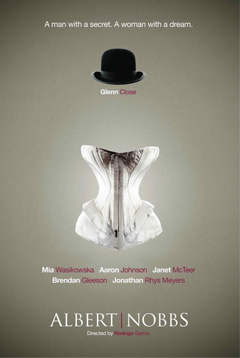 Anyone familiar with Rodrigo Garcia’s work in films such as Things You Can Tell Just by Looking at Her or his latest work in Mother and Child knows that he is not known for his fast-paced films. His color palette usually sports bleak colors and the stories he tells aren’t generally of the sunshine and daisies kind.

Albert Nobbs is also sort of a passion project for Glenn Close, who not only starred in the film as the title character and wrote the script alongside John Banville — she also produced it. Albert Nobbs is Glenn Close’s baby, and just like there are mothers who can’t see the ugliness of their children, Close was unable to see the little commercial appeal a film like this would have.

But maybe she meant for it to be that way.

Albert Nobbs is a very sad movie, and she got the perfect director to handle the material.

Mr. Nobbs (Close) is the perfect, whatchamacallit… hotel butler. He lives for the job — waking early in the morning to tend to the hotel’s guests, serving them meals and pampering the ladies of society in 19th century Ireland. He is distant with his other co-workers because he’s got a secret — Mr. Nobbs is a she.

When the hotel Nobbs works at needs a makeover, she meets a painter who makes her yearn for something more in life. No, this isn’t Yentl and Close isn’t going to fall in love with a man. Nobbs isn’t actually a lesbian either, but the character’s situation is a lot more complicated than it first appears to be.

Perhaps Albert Nobbs isn’t a life-changing film, but I doubt Glenn Close wanted to make that kind of film. It’s very affecting subtly. Everyone is going on about their business as the thread of hope in Close’s character begins unraveling. She isn’t commanding because the role doesn’t require her to be. She’s often meek and keeps to herself, trapped in her own self-made prison where she’s been confined for the past 30 years of her life.

When Hubert (McTeer) appears, Nobbs wonders how she managed for so long. One also wonders…I shall stop here, because I don’t want to give all the movie away. All I have to say is that McTeer should probably be considered for and award for best supporting actor because all of her scenes with Close are what make the film.

Mia Wasikowska was good in this too. Maybe the most grown-up she’s ever played — compared to her latest roles in Restless or even Jane Eyre. I have no idea if the accent was completely accurate, but she certainly reminded me of Gwyneth at times. Whether that’s good or bad is up to you.

In the end, there’s a certain TV-movie-esque quality to this that makes it too unpolished for the critics to fall all over it. If it were Meryl Streep playing Albert Nobbs, it would probably be a completely different story, with everyone falling at her feet. However, this is Close’s baby and that’s all it will be.