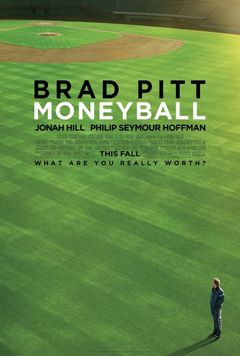 First of all, I really don’t care much about baseball. However, I was interested in checking out Moneyball because I heard many good things about it. At the same time, I was wondering how pairing Brad Pitt against Jonah Hill would work out given that the latter is predominantly known for comedy.

Moneyball, based on the book of the same name written by Michael Lewis, follows Oakland Athletics general manager, Billy Beane (Pitt), a former baseball player who finds a way to rebuild his baseball team into a competitive one with a limited budget and three star players leaving the team for those with more money.

With the help of his new assistant, Peter Brand (Hill), Beane starts to recruit new players by using a non-traditional statistics-driven approach [see: sabermetrics] that Brand developed: finding cheap, undervalued players with high OBP (on-base percentage) to secure more runs — all of that leading Beane to employ a bunch of players with unorthodox characteristics and qualities that would make most baseball scouts dismiss them, including the ones on Beane’s own team.

Aaron Sorkin, one of the writers behind The Social Network, also co-wrote the screenpaly for  Moneyball.  As such, the film follows a similar structure to The Social Network — using actual baseball footage, recreating past events regarding Beane’s failed career as a player and intertwining them with the ongoing story. The film’s editing is a bit similar to The Fighter, but unlike The Fighter, Moneyball doesn’t go into detail about the gameplay; it focuses on presenting a story of revolution through Beane and Brand’s method of recruiting players that led the OAs to achieve an impressive streak of 20 victories.

Brad Pitt’s performance as the rough but smart Billy Beane is pretty strong, showing determination to build a winning team with the limitations he faces and the frustration that arises when things don’t go well for him. He also has great chemistry with Jonah Hill, who proved in Moneyball that he could perform very well in dramatic films despite being known for working mostly in comedy. For me, it’s his best role in his entire career. Unfortunately, Philip Seymour Hoffman as Art Howe, the team’s manager, was pretty much underutilized despite his character clashing with Beane’s plans. The rest of the cast fared well in their roles despite their minimal screentime.

In the end, I thought Moneyball was a good watch. Thanks to the straightforward screenplay written by Sorkin and Zaillian, as well as a solid cast and great direction, it was very easy for non-baseball fans to enjoy. I’m positive that Brad Pitt, the screenplay and the film itself could get nominations at the Globes, BAFTA and Oscars without much trouble. Jonah Hill’s nomination in the supporting actor field might be tougher to obtain despite a great performance.