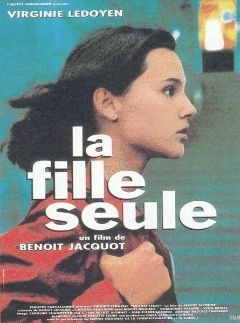 Benoît Jacquot has often spoken about creating films that take place in “mental time,” refracting narrative action and emotion through the inner state of the protagonist. Since 1990’s The Disenchanted, which could be regarded as the director’s second first film, the majority of those characters have been enigmatic young women, not an uncommon fascination for filmmakers, especially male and French. What distinguishes Jacquot’s work, however, is the intensity with which he often focuses on the physical to animate the spiritual and the psychological. It’s a risky strategy due to the age and sex of many of his leads, and, not surprisingly, his films have at times been criticized for offering only surface pleasures. But it’s rarely less than moving to witness his devotion to forming a relationship between the outer and the inner world, between body and mind.

Perhaps no other film Jacquot has ever made illustrates this approach better than A Single Girl, one of the finest and most memorable French films of the 90’s. It opens with an early morning meeting between Valérie (Ledoyen), the eponymous young gamine, and her boyfriend, Rémi (Magimel), in a Parisian café. We discover that it’s an important day for her, as after being unemployed for nearly a year she is about to begin a new job as a room-service waitress at a large metropolitan hotel nearby. But that’s not all. Valérie has also decided to break the news of her pregnancy to her jobless and, as she suspects, unambitious companion. The great Japanese filmmaker Naruse Mikio would have loved this premise.

Jacquot shoots the meat of the conversation between Valérie and Rémi with either alternating close-ups or over-the-shoulder medium-shots, not resorting to a two-shot until it is absolutely necessary. This allows him to heighten the stakes and the intensity of the situation. It also enables us to catch every fleeting emotion on the faces of the characters, especially Valérie, and this is important not only because the film is about her but also given the sense that, despite being a bit selfish and unpredictable herself, she appears to have a more developed inner life. Jacquot, with Hawksian precision, allows us to catch a glimpse of it with her (non-)reaction to an anecdote that finally lifts Rémi’s spirits. She then walks out the door, but not before promising to meet him at the same place in about an hour. This is followed by the first of three remarkable steadicam shots of Valérie in the film, on live streets, as she moves to and fro between the café and the hotel.

The ensuing hour unfolds in almost real-time, with Jacquot and his long-time DP Caroline Champetier restlessly following their subject’s every move as she becomes acquainted with the people and the politics associated with her new occupation.  This also happens to be a great film about “work,” and there are never enough of those around. The ambiance of the hotel during the hectic breakfast time is strikingly captured in the movie.

Although Ledoyen, who was recommended to Jacquot by his good friend Olivier Assayas after Cold Water (1994), had previously worked for the director in the television film La Vie de Marianne, it was her performance here that cemented her place on the ever-congested French map of talented young actresses. She is as precise and disciplined as Jacquot’s aesthetic. Thanks to Jacquot’s lengthy collaboration with Isild Le Besco, she didn’t get to work with him again until recently in the terrific Farewell, My Queen. Imperceptibly channeling her inner turmoil through minute gestures and expressions, she otherwise flies through the pristine corridors of the hotel with swaggering self-confidence and flair.

Jacquot boldly subverts the hyper-immediacy of the proceedings with an epilogue set in the near future. Valérie is now found in the presence of her decidedly more feminine mother, whom she had intermittently, and irrationally, spoken to over the phone earlier on in the film. The duo’s quasi-Almodóvarian discourse regarding existential concerns provides hints about Valérie and her current state of mind. And then she starts moving again, as if challenging the camera, and us, to catch up to her while she navigates the indeterminate terrain of life.