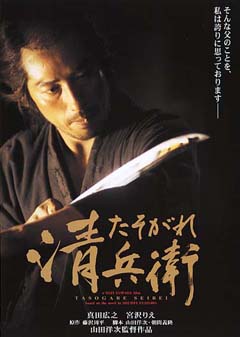 The Twilight Samurai is one of those films that reminds me of great Hollywood on-screen epic romances like… you know, Gone with the Wind, Casablanca… but you know – Japanese.

It tells the story of this man (Sanada) who’s lost his wife to consumption, has two little girls and a mother who can’t even recognize her own son. The other samurais talk about him because he smells even worse than dried codfish, his clothes are torn with no one to mend them for him, and no time to go out drinking and ogling at women after work.

Poor Seibei Iguchi is a social outcast with no money and no life outside of his home-life, but he doesn’t care. He doesn’t begrudge other samurai with better jobs, more status. All Seibei wants to do is have enough to take care and be with his daughters and his mom. His uncle suggests he marries a not-a-beauty to get some weight off his back, but Seibei is so good that he finds it insulting to him and to the lady.

Then one day, talking to his friend Iinuma, who tells him that his little sister is back home after a failed marriage to a mean drunk who abused her. Iinuma’s little sister, Tomoe (Miyazawa), used to be childhood friends with Seibei.

It’s thanks to Hiroyuki Sanada and Rie Miyazawa’s acting skills, as well as their chemistry, that this film worked. You know the moment you see them interacting that they’re supposed to get together, but you don’t know how. However, you think it’s the right time right after Sanada’s monologue on how he’d been thinking about her since that day, and you think everything is finally in the right place — Miyazawa’s line delivery could almost break our hearts, as it does hers… right after Seibei’s mom doesn’t recognize her.

As someone not very familiar with samurai genre films, I certainly wasn’t thinking of finding a love story in a jidaigeki type of film, where I was expecting loads of sword fighting and quite a bit of honorific action sequences — I’m sorry, I’ve watched The Last Samurai way too many times. Then again, I guess it all comes down to Yoji Yamada, who injected the genre with an even more romanticized look of “the way of the samurai.” It’s good, it’s engaging, it’s refreshing~

All the wait, all the hardships, it’s all worth it.