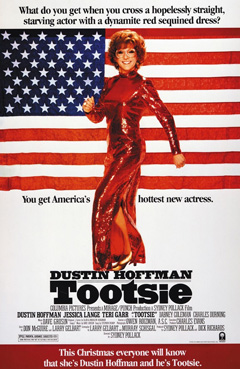 It’s tough to be in an all man’s world, especially if you’re a man dressed up as a woman making it in an all man’s world. Dustin Hoffman plays Michael Dorsey, a down on his luck struggling actor who has been unemployed for the past two years of his life. After accompanying his friend Sandy (Garr) to a failed audition and desperate for a job, Michael dresses up and begins playing, in a freakishly realistic way, the role of his life: Dorothy Michaels, the breakthrough daytime drama actress that will rock a nation.

The story on Tootsie is a lot of fun, as a lot of the humor seems to have overcome the passing of the years, but what makes the film stand out is Hoffman’s performance and character. Though most of the characters are there supporting the comedic moments and moving the plot forward, except for Bill Murray who is just there being Bill Murray, and Jessica Lange’s Julie who does have a gradual change, it is Hoffman’s Michael that becomes a better man by reconnecting with his inner woman, and what a woman.

Starting out as a man who doesn’t really have much thoughts on women, other than maybe trying to bed them, Michael has an eye-opening interaction with his daytime drama director, Ron (Coleman), who happens to be in a mirroring relationship with Michael’s crush. And though I didn’t fully buy Michael’s falling for Julie, I did kind of loved their girlfriends interactions.

Tootsie also doesn’t feel like a movie made in the early 80s, instead it feels like it could fit perfectly in the late 80s or early 90s in production design, while its themes can still be easily related to our contemporary lives. Of course, this isn’t a solely LGBT films, since it doesn’t explore any of the issues that affect them, instead strips down the issues to their most basic and mainstream: it’s a man who dresses up as a woman, and in the process learns a bit about gender perception and himself. It’s as serious gender-bending the mainstream has seen, because — let’s face it — Mrs. Doubtfire, The Birdcage, White Chicks and the Big Momma’s series aren’t exactly all that serious.